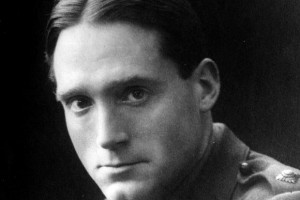 25 November is the birthday of the great man of the theatre, Harley Granville Barker. Barker was born in 1877 and in 2009 Richard Eyre proclaimed him his hero and “the father of modern British theatre”.

Barker’s talents were many. He received little education but went to stage school at 14. He began to work as an actor, experience that undoubtedly stood him in good stead later and wrote his first play at 17. In the early 1900s he worked with William Poel, founder of the Elizabethan Stage Society, playing leading roles. He directed his first Shakespeare play, The Two Gentlemen of Verona, in 1904, at the Court Theatre (which became the Royal Court Theatre) in Chelsea. He ran this theatre for three years during which time he was responsible for productions of 37 new plays by 17 authors including George Bernard Shaw. There is a biography of him here.

His directing style owed much to Poel, emphasising the open platform stage, swift and musical speaking and scenery that was symbolic rather than representational. As Barker bluntly put it, “Mr Poel…cleared for us… the scenic rubbish by which it had been so long encumbered and disguised”. 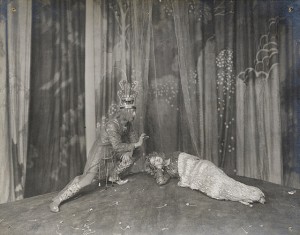 Oberon and Titania from A Midsummer Night’s Dream, Savoy Theatre 1914

What has made Harley Granville-Barker renowned in the history of Shakespeare on stage, though, was his productions of three plays at the Savoy Theatre between 1912 and 1914. He worked with designer Norman Wilkinson to create an apron stage draped with curtains in bright, bold patterns, rather than painted scenery designed to create illusions. The three plays were The Winter’s Tale, Twelfth Night and A Midsummer Night’s Dream. Most famous were the gilded fairies in the last of these: the costumes were elaborate, but gone were the pretty winged creatures theatregoers were used to seeing. The productions created a sensation and must have signalled to the traditionalists that the wind of change was blowing.

In 1915 he divorced his first wife, actress Lillah McCarthy and married American novelist Helen Huntingdon.  Together they moved to Paris after the end of the War,  and he retired from public life aged only 40. He spent much of his life from 1927 until his death in 1946 writing his series of book Prefaces to Shakespeare. He devoted a whole book to Hamlet, published in 1930. I have the copy I bought as an A level student and still remember reading the book avidly. We hear much about the need to see Shakespeare on stage, but Barker’s book brought the play and its imaginative possibilities alive for me much more effectively than the production which I saw around the same time (Alan Howard at the RST, I’m sorry to say).

His approach, outlined in his general introduction to the Prefaces, was to analyse the plays as works for the stage: “A text acquires virtue now by its claim to be a prompt book”. Critics writing about Shakespeare “need refreshment from the living art”. The Prefaces themselves “are an attempt to profit by this new scholarship and to contribute to it some research into Shakespeare’s stagecraft, by examining the plays, one after another, in the light of the interpretation he designed for them, so far as this can be deduced; to discover, if possible, the production he would have desired for them”. In doing so he drew greatly on his own experience as actor, director and playwright. 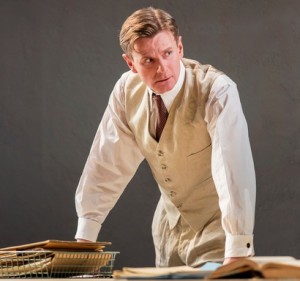 Barker was also instrumental in the early discussions about the creation of a National Theatre in London, a project that took decades to come to fruition, opening only in 1976 many years after his death. Coincidentally a production of one of Barker’s plays, Waste, is currently being performed at the National Theatre, running until 19 March. It’s a story of political sleaze and the downfall of an opponent of the Establishment. Barker wrote it in 1906, but it was famously banned by the censors and did not receive its first performance until 1926. The story, sadly, is pretty well always topical. It is set during a hung parliament, when an idealistic Independent MP is co-opted by the Tories to push through a controversial Bill relating to the Church of England. The MP, Henry Trebell, has an affair with a married woman that ends with her death after a backstreet abortion. Abandoned by the Tories, his career is ruined by the scandal.

The current production is directed by Roger Michell, and stars Charles Edwards as Trebell and Olivia Williams as the woman. Back in 1985 the RSC put on a production at the Pit starring Daniel Massey and Judi Dench, plus stalwarts Oliver Ford-Davies and Tony Church, directed by John Barton. It was so successful it transferred to the Lyric Theatre in April of that year. There have been a number of well-received revivals of the play including one in 1997 at the Old Vic by the Peter Hall Company led by Michael Pennington and one at the Almeida directed by Samuel West. The production is a fitting celebration of Harley Granville Barker, the giant of twentieth-century theatre.