Shakespeare and the London critics 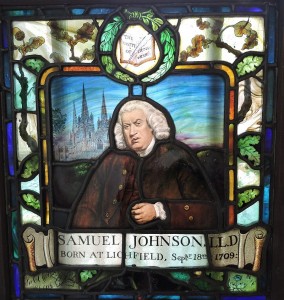 Stained glass window of Johnson, at his house in London

There is still time to visit the exhibition at Dr Johnson’s house in London on Shakespeare in the 18th Century before it closes on 28 November. Although it’s primarily about Johnson’s edition of Shakespeare’s works, I was particularly interested in the section on Johnson’s encouragement of women writers.   In 2008 the National Portrait Gallery put on an exhibition on the Bluestocking Circle and their page on the different women who led this movement is still available on their website.

Foremost among these women was Elizabeth Montagu, nicknamed by Johnson the “Queen of the Blues”. Although an intellectual, Montagu managed to remain fashionable and was described by Hester Thrale as “Brilliant in diamonds, solid in judgement, critical in talk”. Her elegant portrait was painted by Joshua Reynolds but has since been lost: mezzotints give a flavour of what it was like. 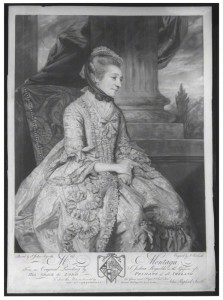 Montagu was a great admirer of Shakespeare, and in 1769 (the year of David Garrick’s Jubilee when Shakespeare-worship hit a high) she published her book An Essay on the Writings and Genius of Shakespeare compared with the Greek and French Dramatic Poets, with some Remarks upon the Misrepresentations of Mons. de Voltaire. Voltaire was critical of Shakespeare, in particular picking on his for disregarding the classical unities of time place and action as set out by Aristotle and as practiced in contemporary French drama by Racine and Corneille. She rebutted these criticisms, claiming that Shakespeare was the greatest of poets, inherently English, and a champion of English virtues.

Disagreeing with the French has long been an English pastime, and not surprisingly her stout defence was popular. She launched quite an attack on Voltaire, pointing out that in his translation of Julius Caesar into French he had made a number of “miserable mistakes, accusing Voltaire of “attempting to hurt works of genius by the masked battery of an unfair translation”.  More surprising within a few years her book had been translated into French and Montagu found herself in great demand at the Parisian salons when she visited France in 1776.

Montagu was one of the first to write critically about Shakespeare, though her main conclusion, that “Nature and sentiment will pronounce our Shakespear a mighty genius; judgment and taste will confess that, as a writer, he is far from faultless” was not particularly profound.  However it was very early for anyone to write critically about Shakespeare’s plays and all the more remarkable for a woman to do so.

The plays she studied in depth are also probably not those that women might have expected to be interested in: Henry IV, Macbeth, and Julius Caesar. In her judgement, Shakespeare was an original writer who combined comedy and tragedy in a new way. She suggested it was wrong to judge this innovative form of drama by the standards of the past.. She admired Shakespeare’s use of the supernatural and his insights into character, in particular Macbeth who shows “the pangs of fear separate from the fear of punishment”.

When her book was first published the name of the author was not included, but Elizabeth Montagu was a wealthy, well-connected woman and by 1777 she was able to include her name on the title page. By then, sadly, she had fallen out with Samuel Johnson after she had accused him of not praising Shakespeare enough in his 1765 edition. The full text of her book can be read here.

Also mentioned in the exhibition is the writer Charlotte Lennox who in 1753 wrote Shakespeare Illustrated, which, twelve years before Johnson’s edition  traced the origins of the plots of Shakespeare’s plays, and accused Shakespeare of being unoriginal.  Another woman who received the encouragement of Johnson was Elizabeth Carter, much admired by him for her knowledge of the classics and her talent as a translator. Although they didn’t always agree with him, these women all received encouragement from Johnson that helped them make their mark. 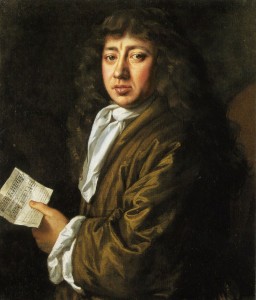 As the Johnson exhibition is closing, an exhibition on another great Londoner from the preceding century, Samuel Pepys, opens at the National Maritime Museum in Greenwich on 20 November, running until 28 March 2016. Entitled Samuel Pepys: Plague, Fire, Revolution the exhibition will encourage you to “immerse yourself in one of the most vibrant and chaotic periods of our history, witnessed and brilliantly brought to life in the candid, witty and irreverent diary of London’s own Samuel Pepys.”

Pepys had a serious job at the Navy Board, but his diary also records the minutiae of everyday life from 1660-1669: he was a notorious gossip and womanizer. He loved the theatre, where professional actresses appeared on the stage for the first time. Shakespeare-lovers will have read some of the judgements he made on what he saw in the playhouses. Pepys was refreshingly frank, and often didn’t care for Shakespeare’s plays. He thought A Midsummer Night’s Dream “the most insipid ridiculous play that ever I saw in my life”, Twelfth Night “one of the weakest plays that ever I saw”, and Romeo and Juliet “a play of itself the worst that ever I heard in my life”. In such turbulent times no wonder Pepys thought of the theatre as primarily just entertainment, but he also appreciated the serious side of Shakespeare’s plays: his favourites were Hamlet, Macbeth, Othello and The Tempest, each of which he saw several times.