The men who gave us Shakespeare 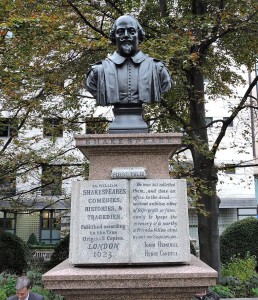 The monument to Heminges and Condell

While visiting London recently we went in search of a relatively little-known Shakespeare monument. It’s the memorial to John Heminges and Henry Condell just around the back of the Guild Hall. It stands in what used to be the churchyard of St Mary Aldermanbury, overlooking Love Lane, and it’s a poignant spot.

The quaint-sounding location is nowadays overshadowed by huge office blocks, a reminder of how much the City of London has changed. The Church of St Mary Aldermanbury was burnt down in the Great Fire of London in 1666, rebuilt by Wren, then destroyed in the Blitz of 1940. The monument, and the little oasis of green that surrounds it, is lucky to have survived.

The monument, topped with a bust of Shakespeare, is well cared-for but few people probably visit it to pay homage to Heminges and Condell. This is a pity because all those of us who care about Shakespeare owe them a tremendous debt. Both were members of the same acting companies as Shakespeare, were shareholders of the Globe, but also were friends of Shakespeare for over two decades. Both were left money by Shakespeare in his will to buy mourning rings. And, vitally, they ensured that years after he had died an “official version” of his plays was published. This website contains many photographs of the monument.

Quite a lot is known about John Heminges. He was born in 1566, just two years after Shakespeare, in Droitwich, a town only a few miles from Stratford. He became a member of the Grocers’ Company in the City and continued to be involved in the Company: this must have given him considerable respectability. A coat of arms was granted to him in 1629. He handled much of the business of the acting companies but little is known about his acting skills, though in a ballad written after the burning down of the Globe he was described as “old stuttering Heminges”. He lived in the parish for over four decades and was buried there in 1630.

Less is known about Condell, and I’m relying on Wikipedia for the information that he came from East Anglia and eventually bought an estate at Brockhampton, Snowshill, in Gloucestershire, again not many miles from Stratford. Condell lived in the Parish of St Mary Aldermanbury for several decades before buying a country home in Fulham, and died in 1627.

Both men were churchwardens in the parish and baptised their children there, and both left shares in the Globe and Blackfriars Theatres as well as substantial property. Both men are named, as is Shakespeare, in the cast lists of some of Jonson’s plays. In many ways their lives seem to have mirrored each other, and were closely bound up with Shakespeare. In 1982 Charles Connell wrote a book about the pair, They Gave Us Shakespeare. 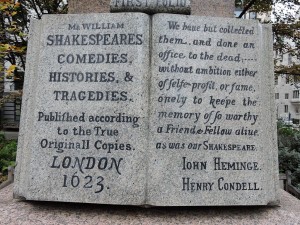 Details of the First Folio on the Heminges and Condell memorial

The memorial was put up in 1895-6 to pay respect to these men who lived and worshipped locally as well as playing a vital role in the cultural history of our country. It was designed by Charles Clement Walker who included a number of inscriptions explaining its significance. One of these is a volume containing words from the 1623 First Folio, including a quotation from their preface “To the Great Variety of Readers”. You will find a huge amount of information on this post by Adam Hooks.

This preface is one of the great components of the book. It tells us that Shakespeare’s plays were already renowned: “these Playes have had their triall alreadie, and stood out all Appeals”. Then it goes on to give us a really personal insight into the author from people who really knew him:
It had bene a thing, we confesse, worthie to haue bene wished, that the Author himselfe had liu’d to haue set forth, and ouerseen his owne writings; But since it hath bin ordain’d otherwise, and he by death departed from that right, we pray you do not envie his Friends, the office of their care, and paine, to haue collected &publish’d them; and so to haue publish’d them, as where (before) you were abus’d with diuerse stolne, and surreptitious copies, maimed, and deformed by the frauds and stealthes of iniurious imposters, that expos’d them: euen those, are now offer’d to your view cur’d, and perfect of their limbes; and all the rest, absolute in their numbers, as he conceiued them. Who, as he was a happie imitator of Nature, was a most gentle expresser of it. His mind and hand went together: and what he thought, he vttered with that easinesse, that wee haue scarse receiued from him a blot in his papers. But it is not our prouince, who onely gather his works, and giue them you, to praise him. It is yours that reade him. 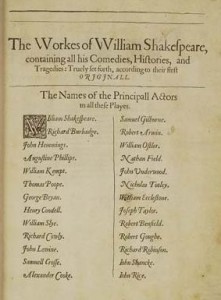 The list of actors in the First Folio including Shakespeare, Heminges and Condell

The astonishing thing about the First Folio is that without it we would have only around half of Shakespeare’s plays. We would not have Twelfth Night, Julius Caesar, Macbeth, The Tempest or Antony and Cleopatra, among many others. The British Library’s website has a good page on the Folio.

Sarah Werner at the Folger Shakespeare Library in Washington DC has written a blog about digitised versions of the book.  This link leads directly to her list of the thirteen copies of the First Folio that are available to consult online, a great resource for anyone interested in early printed books in general and Shakespeare in particular. And a great place to get a sense of the achievement of John Heminges and Henry Condell.

One Response to The men who gave us Shakespeare