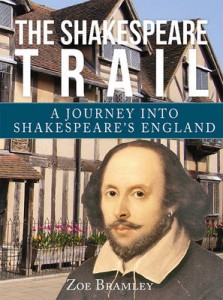 The weather now, in mid-December, is as dreary as Shakespeare describes at the end of Love’s Labour’s Lost. Ways are truly foul and there is little incentive to get anywhere on foot, even though that’s always my favourite method of exploring anywhere new. And places of historic interest, built before the age of steam or the internal combustion engine, were always intended to be seen at a slow pace.

So I’ve particularly enjoyed reading Zoe Bramley’s good-natured new book The Shakespeare Trail: a Journey into Shakespeare’s England, recently published by Amberley Press.  This is a hybrid book, part guide book, part study of Shakespeare’s physical and intellectual world. I can imagine sitting reading this with a map beside me, following the routes and reading her descriptions. With lots of good illustrations included you can easily enjoy it without actually setting foot outside, but it would be a great companion if you were to tackle them. And it’s intended that you should, as Bramley encourages you along, including details of opening hours, ticket prices, and even the numbers of the local bus services. While this is a strength, and makes it great for people visiting in 2016,  it also means the book will quickly get out of date, though she also includes phone numbers and website addresses so details can be checked.  She chooses appropriate quotations from Shakespeare to match different locations, reminding us of exactly what the connections are, and even picks out walking-related quotes.

The book’s divided into sections, the first of which is about Stratford. As well as a section on nearby attractions like Mary Arden’s and Kenilworth Castle she offers a walking guide around the town. I’d have liked to see a reference to Stratford’s historic Town Hall with its statue of Shakespeare, as well as one or two other in-town locations, and being picky I noticed a couple of small errors in the Stratford section. However they don’t detract from the rest of the book. And the author clearly enjoyed Stratford, describing it as “happy [and] positive”, even calling the Birthplace handsome (an epithet rarely applied to it by guide-book writers over the last two hundred years or so).

The author is happy to accept that there might be a grain of truth in most of the legends of Shakespeare’s youth including those connected with Charlecote, Bidford and Lancashire, though is more sceptical of claims that Will might have made it to Italy. She runs through many of the mentions of Shakespeare as he got older including the first reference to him in London, Robert Greene’s sharp piece, so unpleasant it must have been based on jealousy of the mere “upstart crow” actor who dared to rival the well-known writer Greene. 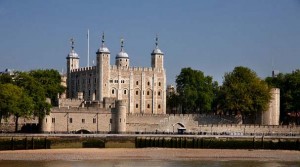 Zoe Bramley’s book really gets into its stride when she gets to London, and no wonder, as she takes guided tours of London herself. It’s obvious that this is a subject she has immersed herself in, including sections on famous landmarks like the Tower of London as well as finding intriguing corners hidden away: most of the London Shakespeare knew was destroyed during the 1666 fire, and World War 2 bombing did for much of the rest. But Bramley notes well the archaeological discoveries in the City that, against all the odds, are still informing us about the City as far back as the Romans and picks out the locations of buildings long gone such as the Bell Inn from which Richard Quiney wrote his letter to Shakespeare in 1598 and the existence of “Shakespeare’s Cellar” in the Cockpit Tavern.

I particularly like the section on Shakespeare’s imagination: places that Shakespeare might or might not have visited, but with explanations of why Shakespeare fans might be interested to visit them. She’s certainly whetted my appetite for a few locations I’ve never been to like the grounds of Bury St Edmunds Abbey which features in Henry VI part 2 and Kimbolton Castle where Catherine of Aragon saw her vision of angelic dancers in the play Henry VIII.
Saw you not even now a blessed troop
Invite me to a banquet, whose bright faces
Cast thousand beams upon me, like the sun?
They promised me eternal happiness,
And brought me garlands…

This is the time to begin planning next year’s expeditions and with 2016 being the 400th anniversary of Shakespeare’s death many people must be hoping to follow in his footsteps. This book would be a great place to start, with Zoe Bramley’s cheerful, knowledgeable voice at your side. As an added incentive, the book is currently half price on the Amberley Press website, making it just £10, a really great Christmas gift. And if the book is a bit too big to stuff in the daysac you could always book a tour with her. I bet in her London tours she’s able to tell more stories than she’s been able to get into the book. For a flavour, this link is to an article she wrote in BBC History Extra in November. And she can be found on Facebook.

2 Responses to Following the Shakespeare Trail