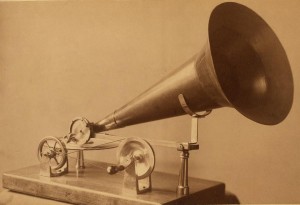 There are few things that take people back to their past more effectively than sound recordings. Mostly, of course, it’s recordings of favourite songs. Last week Radio 4 broadcast a series of programmes entitled His Master’s Voice which looked at the early history of recorded sound with singer Cerys Matthews. The recordings they played were mostly too old for anyone alive today to remember, but some of them were still themselves very much alive. The recording of the tenor Enrico Caruso, played in the last programme, sold a million copies when it was released in 1902 and still sends shivers up the spine.

As the British Library points out, “Sound recordings help us to understand the world around us. They document the UK’s creative endeavours, preserve key moments in history, capture personal memories, and give a sense of local and regional identity.” It’s always been seen as important to record people, particularly famous actors, reciting Shakespeare. Some of the best-known have been issued commercially, like this collection of Great Historical Shakespeare Recordings by Naxos. Here we can find, for instance, Johnston Forbes-Robertson, Edith Evans, John Barrymore and Sarah Bernhardt.  There’s more information about the recordings here. 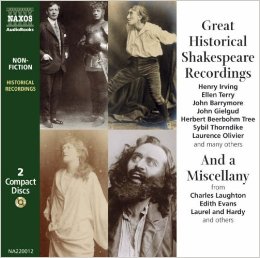 But collections of rare and perhaps unique sound recordings are under threat: not only are they less well-known than collections of images, they are more difficult to access because the technologies by which they are played back have changed so much, and continue to change. And although some formats are stable, others, like sound tapes, are always degrading. At the beginning of 2015 the British Library began a survey, a National Audit of UK Sound Collections. As well as documenting what recordings are held, it will enable the Library to establish the condition and the future requirements of collections. In May the Library received a Lottery grant of £9.5 million in order to help preserve these unique collections. This site contains information about the whole Save Our Sounds project.

This site includes links to the findings of the Audit and to the directory itself, giving details of the data. Shakespeare enthusiasts will be glad to see the Shakespeare Birthplace Trust’s holdings, including recordings made by the RSC, included, though not in any detail.

The audit has brought together information about over 3,000 collections containing over 1.8 million recordings, and “While not comprehensive, the results offer the most informed picture of the state of the nation’s sound collections ever collated and offer a resoundingly clear message – a message that the UK possess an invaluable wealth of recorded cultural memory that is under imminent threat from loss and decay.” The worry now is that by 2030 it will be too late to preserve many of these recordings.  There’s more information about what needs to happen next on the British Library’s Sound & Vision blog.

In the UK the history of commercial selling of gramophones and recordings goes back to The Gramophone Company, set up in 1898 in Covent Garden. Recording was tricky: the person being recorded had to stand very close to the horn, and as the human voice recorded well individuals speaking poetry or dramatic speeches were popular. In the early days, too, recordings could only be a couple of minutes long: ideal, again, for a great Shakespeare speech. According to Programme 4 of His Master’s Voice one of the earliest spoken word recordings was by Charles Wyndham in 1898, who went on to open Wyndham’s Theatre in London in 1899. Gramophones were so immediately successful that by 1899 a huge variety of recordings were available. 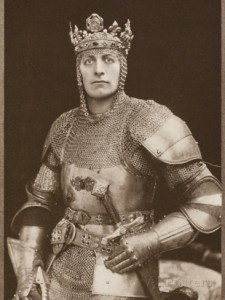 Actor Kenneth Cranham was brought into the programme to talk about spoken word recordings and their relationship to what was happening in the theatre: he mentioned the famous recording of Lewis Waller playing Henry V in 1909, with lots of vibrato, that sounds way over the top today. When listening to it we should remember that Waller was having to give a full-on performance straight into the recording equipment in order to be heard, completely different to the nuanced performance a modern actor can give into a sensitive microphone.

This link is to an even earlier recording of the great stage actor Henry Irving reciting a speech from Richard III in 1898. Again, the recording can’t hope to do justice to Irving’s actual performance. If you’re interested to read more about the history of the gramophone, see here.

It’s not all bad news for early sound recordings: modern technology has also allowed us to retrieve some thought to be beyond our reach. In 2011 this is exactly what happened in the US. “The early audio recordings on Volta discs – which revealed recitations of Shakespeare, numbers and other familiar lines – had been packed away and deemed obsolete at the Smithsonian Institution for more than a century. But new technology has allowed them to be recovered and played.” One of these recordings turned out to be the earliest known recording of Shakespeare, “To be or not to be …’ recited in the early 1880s. By another miracle of modern technology you can hear a sample of this recording by going to the webpage.