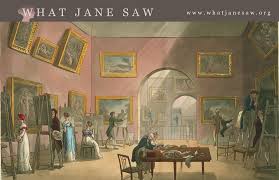 The clever people at the University of Texas at Austin have got in ahead of the mass of Shakespeare-related projects to be released in 2016 by launching an online resource that’s designed to appeal to the more serious Shakespeare fan. And the site will provide a happy hour of gentle entertainment over the festive period if required. The New York Times, in its full article about the project, calls it “a meticulous online re-creation of the long-vanished, and wildly popular” Boydell Shakespeare Gallery.

I’ve been a fan of the Boydell paintings for years, a rather eccentric collection created at the end of the eighteenth century by some of the best artists of the day. The Gallery in fashionable Pall Mall was one of the first manifestations of the nation’s growing obsession with Shakespeare. Unusually it provided the middle classes who were developing a taste for culture with an art gallery they could visit for a shilling. You might think the museum shop where you can take home a souvenir picture of your favourite item is a modern invention, but this was an intrinsic part of John Boydell’s concept. He claimed to have paid £150,000 (a mind-boggling sum) for the paintings to be made, and it was necessary for him to make this money back. Selling high-quality engravings to the public, and creating a fully-illustrated edition of Shakespeare’s plays, was financially essential. 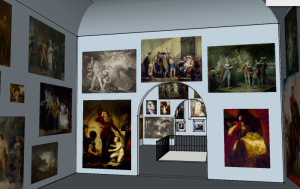 Online version of part of the Boydell Shakespeare Gallery

Sadly the Gallery that had opened in 1789 closed in 1805, though creating and running a successful attraction for 16 years is no mean feat. It attracted crowds of eager visitors, but never made back the massive amount that Boydell had invested. In the end there was a lottery for them, and the winner auctioned the paintings off at low prices. You’ll still find them in many of the major collections in the UK and USA. Around half of the original canvases, though, have disappeared so this website, recreating the glory of the gallery experience, is terrific. The creator of the site, Professor Janine Barchas, has worked out the size of the paintings and how they must have been displayed. 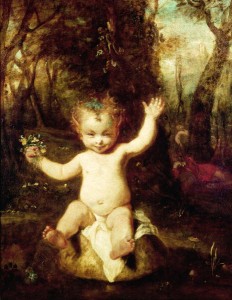 Joshua Reynolds’ painting of Puck, from A Midsummer Night’s Dream

The project has grown out of an earlier one by Professor Barchas, What Jane Saw, and in fact the Boydell project shares the same website. This reproduced in just the same way an exhibition of paintings by Joshua Reynolds, using the same gallery space, that Jane Austen had seen in 1813. The Reynolds exhibition was stunningly glamorous: Reynolds was the leading portrait artist of the day and there, hanging on the walls, were paintings of a huge variety of famous people including royalty, aristocrats and the stars of the theatre. Reynolds’ painting of Puck, as a mischievous baby, featured in both the Boydell Shakespeare Gallery and his own exhibition. People flocked to it. Having already created a digital version of the space, she has been able to use it again to virtually re-hang the Boydells.

So if you visit the website you can explore the long-gone gallery room by room, and there are several different ways of doing so. You could click through each picture from no 1 to no 86, reading the description and the page of Shakespeare text to which it relates. Or you could start with the floorplan and click on one of the walls, bringing up the whole view. Then highlight any of the pictures to get the same information. As well as the artist’s name you can find how much each one was paid, who was the engraver, and look at different versions of the image. You can also find out where the actual painting is now (if it still exists). As an added bonus there is a digitised copy of the 1796 catalogue that includes the full Shakespeare quotes, running to 180 pages.

Boydell intended the gallery to carry on after his own lifetime, as a gift to the nation. It was an intensely English project, meant to promote English painting and painters using the upcoming icon of Englishness, William Shakespeare’s plays. The Times called it “the first stone of an English school of painting”.

The new site has been created by the Texas Advanced Computing Center, using a cross-platform game creation engine. It’s a great example of people from a variety of disciplines working together to create something new in the digital humanities. The technology must also have many other applications in museums and galleries around the world. John Boydell, who wasn’t afraid of gambling on something new, would probably approve. Let’s hope the new additions to the site What Jane Saw will be popular with Shakespeare-lovers in 2016.