The rain it raineth every day 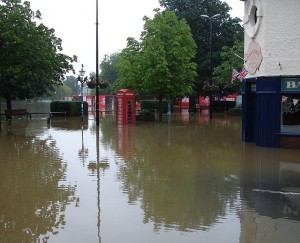 Over the last few weeks the news has been dominated by the dreadful and repeated flooding in parts of northern England and Scotland as a series of storms have swept across the UK. Cities have been swamped and ancient bridges swept away. Although red flood warnings for the Upper Avon valley have appeared on the Met Office’s map, the river has mostly remained within its banks in the Stratford area.

It is certainly not unusual for the river here to flood. On a wall near the Royal Shakespeare Theatre are marks showing where the water has come up to in exceptional floods over the past 100 years or so. The most recent mark is for the flood in 1998, when swans floated down the street known as Waterside and the theatre was surrounded by water. The more recent flood, in 2007, was less high. The floods of May 1932, just weeks after the opening of the Shakespeare Memorial Theatre, are also marked, but the highest mark, some 30cm above the others, commemorates the 1901 floods. 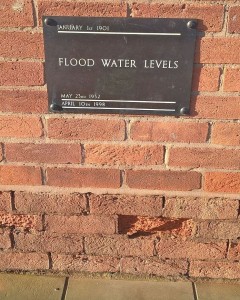 The most famous flood in Stratford’s history was that of September 1769, that coincided with the biggest and most heavily-publicised event the town had seen, David Garrick’s Shakespeare Jubilee, described in detail in Johanne M Stockholm’s book Garrick’s Folly.

The two things everyone knows about the Jubilee is that no Shakespeare was performed, and that the whole thing was a disaster because of the rain. The preparations had been fraught, and in retrospect picking a site for the Amphitheatre right next to the river was a bad idea, but the first day of the Jubilee was very successful. However the main events were to take place on the second day, when Garrick’s delivery of his Ode to Shakespeare was to be preceded by “the most elaborate, spectacular, and ambitious entertainment”, also the most expensive, a procession. The plan was described by Robert Bell Wheler:
170 persons (chiefly represented by performers from the theatres in London) properly dressed, in all the principal characters to be met with in Shakespeare’s plays; with a large and highly ornamented triumphal car, in which two persons, representing Melpomene and Thalia, with the Graces, were to be drawn by six persons habited like satyrs, with attendants carrying emblematic devices and insignia, and accompanied by the whole bank of vocal and instrumental music, to perform a serenade at Shakespeare’s statue and crown it with a wreath of laurel.

Nineteen plays were to be represented, and the costumes were borrowed from Drury Lane theatre. One report noted that over 150 boxes of dresses and scenery were delivered. The procession, timed for 11am, was abandoned first thing in the morning when the rain was already coming down. In the Amphitheatre the Ode was delivered, with an air sung by Mrs Baddeley which began “Thou soft-flowing Avon” including the lines:
Flow on, silver Avon! In song ever flow,
Be the swans on thy bosom still whiter than snow,
Ever full be thy stream.

At this point the doors facing the river were flung open, showing the Avon was indeed full, the rain now pouring down. Rather than being laughable, this moment was commented on as being “irresistible, electric… the most endearing to sensibility that could possibly be experienced”. It continued to rain, and by midnight, when the masquerade ball was to begin, Henry Angelo wrote:

“The floods threatened to carry the mighty fabric [ie the building] clean off. As it was, the horses had to wade through the meadow, knee-deep to reach it; and planks were stretched from the entrance to the floors of the carriages… Such a flood had not been witnessed there in the memory of man”. The masquerade was brought to a close when participants were warned that the Avon was continuing to rise fast.

On the third day Wheler described how as the rain “unremittingly fell…[and] entirely frustrated the exhibition of the pageant” as well as the planned repetition of the Ode. 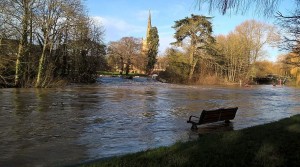 The Avon recently: high, but not in flood

The guests at the Jubilee left Stratford as soon as they could, leaving the inhabitants behind to clear up. There is no record of how the rest of the town was affected by the flood. Most of the town was then, and still is, built on higher ground, but if any houses were affected it was probably those of the poorer inhabitants. Shakespeare was certainly aware of the chaos brought by flooding. In Titus Andronicus, Titus describes watching grieving, tear-stained faces in reflection, likening them to the after-effects of a flood:
[Shall] thou, and I, sit round about some fountain,
Looking all downwards to behold our cheeks
How they are stain’d, as meadows, yet not dry,
With miry slime left on them by a flood?
And in the fountain shall we gaze so long
Till the fresh taste be taken from that clearness,
And made a brine-pit with our bitter tears?