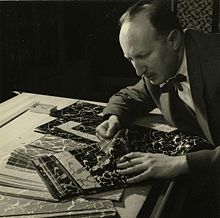 This year the Whitworth Gallery in Manchester is celebrating the centenary of one of the most influential textile designers of the post-war years, Tibor Reich. Reich was born in Budapest in 1916 of a Jewish weaving family, studying textile design in Vienna. Leaving an increasingly anti-Jewish continent, he moved to England where in 1937 he continued his studies at Leeds University.

Hungary and Austria’s loss was England’s gain: just after the war, in 1946, he moved to Clifford Mill, just outside Stratford-upon-Avon. His timing was perfect, experimenting with bright colours and new yarns that must have been refreshing after years of wartime drabness. He quickly gained an international reputation, contributing to the refurbishment of the Shakespeare Memorial Theatre and to the Festival of Britain in 1951. 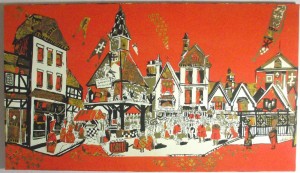 Panel designed by Tibor Reich for the bicentenary of Garrick’s Jubilee, 1969

Although his Hungarian background influenced his work, in particular with its vibrant colours and bold use of graphics, he was also inspired by the natural world, and loved the Warwickshire countryside where he settled after his years in Yorkshire. He became very anglicised, and it’s noticable that he was often selected to work on projects that celebrated England’s achievements in a global setting, such as Concorde and the rebuilding of Coventry Cathedral. The curator of Manchester’s exhibition, Frances Pritchard, mentions in her interview on Front Row Reich’s work at the Memorial Theatre, where he gave different fabrics the names of Shakespearean characters such as Macbeth and Cymbeline, sadly now long gone.

She does not, however, mention his work at the Shakespeare Centre, opened in 1964 as the headquarters and study centre for the Shakespeare Birthplace Trust. Here he created carpets, curtains and hangings, many of which still survive. His relationship with the Trust was long-lasting. I remember him, during the 1980s, visiting the Library’s Reading Room with the then-director Levi Fox, and describing how he got the idea for the carpet that graced many of the rooms, including the Reading Room, from an aerial view of a local forest. The design was called “The Forest of Arden”, and its subtle medley of dots in green, brown, and black were perfectly matched against the Gordon Russell furniture and warm wooden panelling.

The Age of Kings panel

Elsewhere his love of bright colour came out: “The Age of Kings” in blue and green was used for curtains on the stage of the Stratford Room, and in 1969 he designed another zesty panel to celebrate the bicentenary of the Garrick Jubilee. In the Birthplace Trust’s shops his hangings and tea towels were sold to tourist for many years. 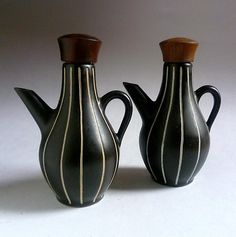 He also designed tapestry, and a panel of scenes from Shakespeare’s plays hung on the landing of the Shakespeare Centre next to the Conference Room. This included Romeo with Juliet on her balcony, Romeo’s swordfight with Tybalt, Hamlet with Yorick’s skull and several others. His interests were wide-ranging. Not content with designing fabrics, he created a range of striking black and white pottery, Tigoware, which was manufactured by Denby, and designed many Royal Mail First Day Covers. I’m indebted to my husband for remembering that he exhibited his collections of stamps and miniature cars at the Tiatsa Gallery in Ely Street. 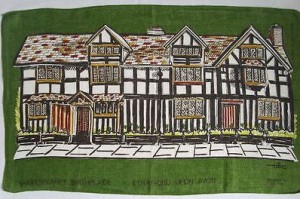 The exhibition of his work in Manchester is timely. Archives of his work are easily available to study at the International Textiles Archive at Leeds University. His grandson Sam, still at Clifford Mill, is hoping to revive the Tibor brand, employing modern designers to be as inventive and innovative as his grandfather was. Following years of being unfashionable, his work is now highly collectable, and much of it looks extremely modern. A search on Ebay shows that even the humble linen tea towels are prized, and maybe it won’t be too long before they’re back on sale again to visitors to Stratford-upon-Avon.

The exhibition at the Whitworth in Manchester will be on until August 2016, and further information about Reich, and photographs of his work in the Shakespeare Centre, can be found on two posts by Rosalyn Sklar on the Finding Shakespeare blog, here and here, and in this obituary from the Independent. I’m also grateful for many details to the late Marian Pringle, who wrote an article about Tibor Reich’s fabric designs for the Shakespeare Centre in the magazine Shakespeare at the Centre.