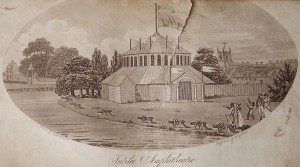 On 28 December 1798 William Tompkins was christened in Holy Trinity Church, Stratford-upon-Avon. He was my great-great-grandfather. I came across this fact, as it happened, on 28 December 2015, reading the book written by my cousin, Carolyn Swain in which she summarises her research into our Warwickshire ancestors. I always knew my grandfather came from Stratford, and lived there all his life, working in two of the most significant Shakespeare buildings, Holy Trinity Church and Shakespeare’s Birthplace. I have a number of his books on Shakespeare and Stratford including a copy of Robert Bell Wheler’s 1806 History and Antiquities of Stratford-upon-Avon. I’ve been surprised to find that our Stratford heritage goes even further back than the publication of that early book.

My brother, also reading the book over Christmas, was disappointed to find “no wealth and little glamour”, as Carolyn puts it. The family was poor, and as records are few it seems they were respectable. Carolyn remembers her mother Joyce calling our family “sturdy working stock”. The men worked as blacksmiths, metal workers, carpenters, shoemakers and labourers.

I now find that generations of relatives were christened and married in Holy Trinity Church. I already knew that one branch of the family were from Snitterfield, the village from which John Shakespeare came. They were carpenters, and managed the timber on the Welcombe estate where Shakespeare himself owned land. An account book survives showing they were literate and numerate. Other ancestors had connections with other places of Shakespearian interest. Several elderly widows found homes in the Almshouses, next to Shakespeare’s school and yards from Shakespeare’s New Place. Not only my father, but his father and uncle, attended King Edward VI School. 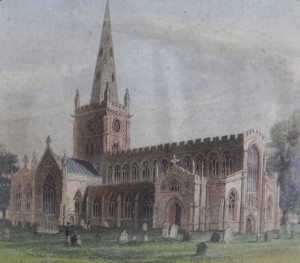 The William born in 1798 became a blacksmith, as did several of his descendants. One was employed at Flowers Brewery as a blacksmith, while others worked for short periods as clerks. The Flower family were good employers and responsible for the building of the Shakespeare Memorial Theatre. The girls went into service or became laundresses. Many Stratfordians between Shakespeare’s time and the mid nineteenth-century worked in jobs that depended on agriculture, just at John Shakespeare did.

What, I wonder, did these humble people make of the burgeoning Shakespeare industry? William was the son of William Tompkins and Anne Wright, who had been married in Holy Trinity Church the year before he was born. William senior and Anne were both born in Stratford in the 1770s. He was a labourer, probably illiterate. The parents of both William and Anne were probably also illiterate, but did they name their children in recognition of William Shakespeare, whose Jubilee had been so extravagantly celebrated just a few years before, in 1769?

They must have been among the onlookers at David Garrick’s Jubilee. Publicity was huge, and the preparations took months, particularly the building of the Amphitheatre by the Avon. Materials and workers were brought in from outside, and locals were reportedly greatly suspicious of the whole business. Stratfordians too must have been overwhelmed by the thousands of wealthy, overdressed outsiders. They will have heard the cannon by the river being fired each morning, seen the fireworks (at least on the first night), and the bands and participants parading from venue to venue. They probably enjoyed the horse-racing on Shottery Fields the most. 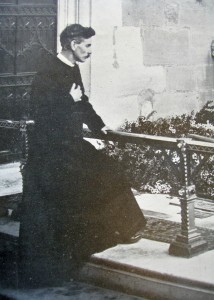 My grandfather at Shakespeare’s grave, April 1920

By the 1864 Tercentenary a number of ancestors were living in Scholars’ Lane, yards from the school and New Place. Almost all the events took place inside the Pavilion, but a pageant, aimed at the locals, was organised by circus manager Jean Frederick Ginnett. Heralds, banners, musicians and people dressed as characters from the plays processed through the streets on Monday 2 May 1864. Special trains were run from as far away as Bristol and it was estimated that 30,000 people crowded the town. My relatives from Scholars’ Lane must have been among them.

I’d like to thank my cousin Carolyn for her thorough research, for successfully writing it up and sharing it. She has also set me right about one thing that has always intrigued me. In the Town Hall is a list of Stratford Mayors. As well as John Shakespeare, it includes the name William Tompkins, and the date 1793-4. Might we be related? The local archives have revealed that he became a Capital Burgess in 1784, Mayor in 1793, and remained an Alderman until the Prince Regent’s visit in 1806. By contrast, “our” William Tompkins was a mere labourer, so a connection seems unlikely. There can’t, though, be many people living in the town whose families have been in Stratford since the start of the Shakespeare industry, even if for most of that time they’ve been watching from the sidelines.

7 Responses to Uncovering my Stratford roots