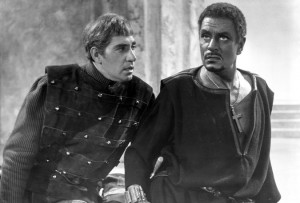 Frank Finlay as Iago and Laurence Olivier as Othello

Almost swamped by the understandable outpouring of tributes for the late Sir Terry Wogan, the death of the fine actor Frank Finlay at 89 has passed with little attention this week. Most people remember Finlay for his screen and TV work including Casanova on TV and The Three Musketeers on film. Among the obituaries is one from Michael Billington (another national treasure himself). This link is to Finlay’s own website,  And this to the Telegraph obituary.

Frank Finlay’s portrayal of Iago to Laurence Olivier’s Othello at the National Theatre in 1964 was his most famous Shakespeare role, not least because the production was filmed, going on release in 1965. One of his other Shakespeare parts was the Gravedigger in the first National Theatre production of Hamlet starring Peter O’Toole. According to Daniel Rosenthal, Finlay’s Iago was “excessively restrained, an unassuming chap whose matter-of fact tone suggests destroying Othello is a bit of a chore”. Olivier, by contrast, gave an “outsize, elaborate, overwhelming” performance: “When jealousy takes hold he roars and howls like a wild animal”. Olivier had himself played Iago and knew how powerful the role could be: as well as speaking directly to the audience Iago is a much larger role than Othello. Finlay was a successful foil to Olivier, remaining straight-faced even in close-up. The relationship between all four leads (Olivier as Othello, Finlay as Iago, Maggie Smith as Desdemona and Joyce Redman as Emilia) worked so well that when the film was released all four were nominated for Oscars. 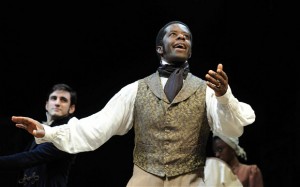 Olivier blacked up to play Othello, a tradition going right back to Shakespeare’s day when Richard Burbage first played the role. Nowadays it is almost impossible for a white actor to play Othello: last year at the RSC Iago too was played by a black actor, but colourblind casting is a long way off. Red Velvet, Lolita Chakrabarti’s play about Ira Aldridge who was in 1833 the first black actor to play Othello, has recently opened at the Garrick Theatre in London’s West End and plays there until 27 February. It was originally produced at the Tricycle Theatre in 2012, again with Adrian Lester as Aldridge. Lester himself played Othello to acclaim at the National Theatre, among other successful Shakespeare roles. As well as charting the career of Aldridge, it examines changes in acting styles, where gesture told the story as much as words: “It’s a fascinating glimpse of a forgotten theatrical language, but when Aldridge imbues Othello with naturalistic, bone-rattling fervour, it’s electrifying: man discovering fire.” Perhaps most, though, it’s a play about racial politics. Aldridge was patronised and treated with appalling prejudice, and although he also played traditionally white parts such as King Lear the play is a reminder of how far there is still to go before we have equality in casting.

This too is the subject of the British Black and Asian Shakespeare project at Warwick University, which has now launched its database. This “was originally conceived as an historical record, acknowledging, documenting and celebrating the contribution of Black and Asian artists – especially performers – to the development of Shakespearean production in modern Britain”. It has “developed into an ongoing record of contemporary casting practices”, demonstrating how many (or how few) black and Asian actors have appeared in productions of Shakespeare plays in the UK from 1930 to 2015. The construction of the database has also “coincided with increasingly urgent calls for greater diversity within the entertainment industries” and will support the case for change. The database is organised around people, plays, companies and roles: there are valuable biographies, I particularly enjoyed searching for plays to see which roles are played most often by black and asian actors, and when. I was pleasantly surprised to see how many Romeos and Juliets are on the list as well as the obvious Aarons, Othellos and Princes of Morocco. 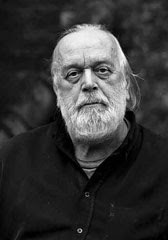 As I was preparing this post, news came in of the death of another person who changed post-war British theatre, director William (Bill) Gaskill. He had directed Olivier and Maggie Smith in The Recruiting Officer for the National Theatre at around the same time as Othello, and most importantly was responsible, while Artistic Director at the Royal Court, for the production of Edward Bond’s play Saved. This play, with its graphic presentation of the stoning to death of a baby, fell foul of the Lord Chamberlain and had to be put on as a private performance. The controversy surrounding the play was one of the leading factors that led to the abolition of censorship on the stage in 1968.