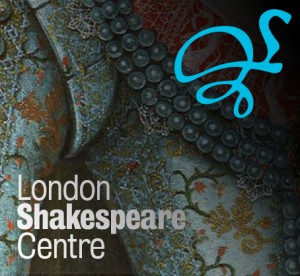 A number of exhibitions and productions celebrating 2016 as the 400th anniversary of Shakespeare’s death are already under way, but there’s on organisation that’s getting in early by staging a weekend of great one-off Shakespeare events at the end of this week.

From Thursday 11 to Sunday 14 2016 February King’s College London is holding King’s Shakespeare Festival Weekend. The weekend is going to be a terrific blend of academic lectures and more popular events. Thursday evening sounds like a great evening to start it off: first they will mark the publication of the anthology On Shakespeare’s Sonnets: A Poet’s Celebration with a performance including poems by Carol Ann Duffy, Simon Armitage, Jo Shapcott and others. This will be immediately followed by a performance by Ashley Riches (baritone) and Emma Abbate (piano) of a selection of twentieth century Shakespeare songs. On Friday evening there will a lecture by Professor Gordon McMullan, director of the London Shakespeare Centre, on the compelling and topical subject Remembering and Forgetting in 1916: the Shakespeare Tercentenary and the First World War, and a Q&A with scholar and author James Shapiro.

On Saturday the events begin at lunchtime with a lecture by Lena Cowen Orlin on The Second-Best Bed that Shakespeare famously left to his wife in his will, followed by “an exploration by professional actors and King’s academics of the glimpses we see of Shakespeare’s life through the brief records he left behind.”, which sounds intriguing. Later on there will be a showing of new animated films and a series of lectures. The musical theme continues with “a multidisciplinary reflection on the character Tom O’Bedlam in song, history and lived experience”, and the day ends with an evening of nineteenth century Shakespeare songs and scholarship.

On Sunday afternoon there’s a staged reading of a new play by Emma Whipday, Shakespeare’s Sister, marking its publication by Samuel French, followed by David Scott Kastan’s deliberations on the subject of Shakespeare’s Will, looking at the materials on display in the By Me William Shakespeare exhibition (see below). The weekend rounds off with acclaimed actor Simon Russell Beale in conversation with Sonia Massai. Simon has already performed many of Shakespeare’s leading roles and will be making one of the most striking contributions to the year’s celebrations by taking on the role of Prospero in The Tempest for the RSC towards the end of 2016.

I love the way the organisers of the weekend have tried to mix entertainment and a lighthearted look at the history of popular culture with lectures by highly-esteemed academics. During the year, Shakespeare 400, described as “a consortium of leading cultural, creative and educational institutions in and around London” will be putting on lots of other talks, debates, performances and film screenings: this is just the start of what promises to be a year full of delights for the Shakespeare enthusiast. 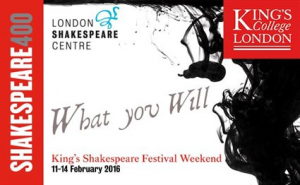 Already on, from 3 February – 29 May at the Inigo Rooms, Somerset House, is an exhibition co-curated by The National Archives and the London Shakespeare Centre at King’s College, London, By Me William Shakespeare,  that puts on display Shakespeare’s Will alongside other unique documents. It’s described as a once-in-a-generation opportunity to see key documents, including fours of Shakespeare’s known signatures among the nine most important documents held by The National Archives relating to his life.

Presented together for the first time, these are some of the most significant documents in the world that track Shakespeare’s life as a citizen of London, a businessman, a fmily man and servant to the King and even possibly a thief and a subversive. They explore both his domestic and professional lives, what it meant to live in the Elizabethan and Jacobean eras and the social impact of his plays.

And also on, but with much less fanfare, is an exhibition in the Entrance Hall to the Strand campus of King’s College, entitled Shakespeare in 1916 that shows how Shakespeare was remembered a hundred years ago and how his work was studied at the time.