The Merry Wives of Windsor in the Royal Library 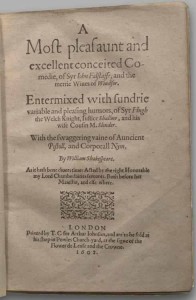 The story that Shakespeare wrote The Merry Wives of Windsor in response to a request from Queen Elizabeth to see Falstaff in love goes back a long way. In the prologue to his 1702 adaptation of the play, The Comical Gallant, John Dennis alludes to it as does Nicholas Rowe in the biographical essay at the start of his 1709 edition of Shakespeare’s works. This may be only wishful thinking, but we know that the play was performed in front of Queen Elizabeth, because the title page of the first quarto tells us “As it hath bene diuers times Acted by the right Honorable my Lord Chamberlaines seruants. Both before her Maiestie, and else-where”. The new exhibition at Windsor Castle, Shakespeare in the Royal Library may only boast a copy of the 1619 Quarto, not the 1602 edition (the one illustrated is from the British Library), but there are many more unique and wonderful treasures to explore while it is open for the rest of 2016.

This is just one of the links between royalty and the play. The pub frequented by Falstaff and his cronies is “The Garter”, the Order of the Garter being the highest honour bestowed by the monarch. In the final scene, Mistress Quickly commands her fairies to “Search Windsor Castle, elves, within and out” to bless its rooms before describing the Order of the Garter itself. 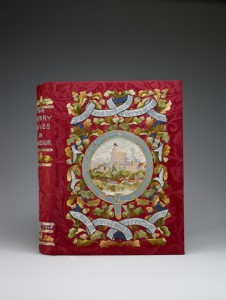 The embroidered edition of The Merry Wives of Windsor, 1917

The several chairs of order look you scour
With juice of balm and every precious flower:
Each fair instalment, coat, and several crest,
With loyal blazon, evermore be blest!
And nightly, meadow-fairies, look you sing,
Like to the Garter’s compass, in a ring:
The expressure that it bears, green let it be,
More fertile-fresh than all the field to see;
And ‘Honi soit qui mal y pense’ write
In emerald tufts, flowers purple, blue and white;
Let sapphire, pearl and rich embroidery,
Buckled below fair knighthood’s bending knee.

This has led to speculation that the play might have been written to be performed for the Order of the Garter Festival that takes place annually on St George’s Day. A specific occasion could have been when George Carey, Lord Chamberlain and patron of Shakespeare’s company, was granted the order of the Garter in 1597. Another monarch who took a great interest in royal pageantry including the ceremony of the garter was George IV, who as I explained last time adopted Shakespeare’s Birthday, also St George’s Day, as his official Birthday. He too may have felt a particular link with this play.

Another of the famous myths surrounding Windsor Castle is the story of Herne’s Oak, an ancient tree that stood in Windsor Park and which features in The Merry Wives of Windsor. Around it Mistress Quickly and her fairies dance around him, pinching and humiliating the fat knight.  Mistress Page explains:
There is an old tale goes that Herne the hunter,
Sometime a keeper here in Windsor forest,
Doth all the winter-time, at still midnight,
Walk round about an oak, with great ragg’d horns;
And there he blasts the tree and takes the cattle
And makes milch-kine yield blood and shakes a chain
In a most hideous and dreadful manner:
You have heard of such a spirit, and well you know
The superstitious idle-headed eld
Received and did deliver to our age
This tale of Herne the hunter for a truth.

The story of Herne was said to date back to the days of Richard II, and the area around the oak was a place where “many …do fear /In deep of night to walk”. Shakespeare took this old superstition and elaborated on it, creating the comic climax to the play in the same spot.

Perry’s book on Herne’s Oak, bound in carved wood from the fallen tree

The authenticity of the oak came to be questioned around the time the old tree blew down in 1863, and four years later William Perry, Wood Carver to Queen Victoria, published a book claiming its authenticity, A Treatise on the Identity of Herne’s Oak Inferring the Maiden Tree to Have Been the Real One. A copy of this book, the binding made of wood from the tree and beautifully carved by Perry, with a photograph of the tree on the cover, is another unique item in the exhibition.

One of the most spectacular editions of The Merry Wives of Windsor is also on display, shown above. Its covers are made of red damask, embroidered with an image of the Castle, surrounded by the Garter, with an oak and acorns behind. Details, including include quotations from the play are picked out in gold and silver thread. This gorgeous book was a gift to Queen Mary in 1917, and shows how strong the connection between the royal family and the play continued to be centuries after it was written.