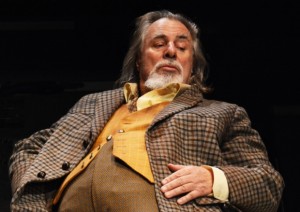 The website Shakespeare 400 is the product of a London-based consortium based at King’s College, so it’s no surprise that the events listed there are based in the capital. There are so many things listed there that it would be possible to do something Shakespeare-related just about every day for the rest of 2016 without repetition.

For those of us who love our Shakespeare but aren’t based in London, I thought I’d mention a few of the events taking place a bit further north over the next few weeks. For some of this information I’d like to thank the excellent performance listings site Touchstone, run by the University of Birmingham, always worth checking particularly as they list a broad range of Shakespeare-inspired work.

Coming up very soon is a poetry reading in the Main Library in Newcastle-upon-Tyne, where they are launching a new Shakespeare anthology of poetry and prose entitled Breaking Bard. The performance will take place on 14 March at 17.45.

Northern Broadsides tour of The Merry Wives of Windsor is already under way, with performance until 12 March in Hull followed by venues at Salford, Leeds, Scarborough, Huddersfield, York and Liverpool by the end of May, as well as several places down south. The play is directed by Barrie Rutter and stars him playing one of Shakespeare’s greatest characters, Sir John Falstaff.

Coming up at the beginning of April is Talawa Theatre Company’s King Lear. The play will be directed by Michael Buffong and will star Don Warrington as the King. It opens in Manchester on 1 April followed by a couple of weeks in Birmingham. 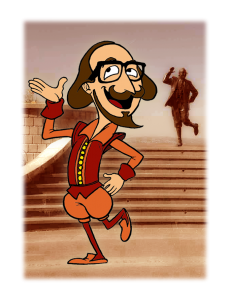 Morecambe’s Bard by the Beach

For the first time ever the Lancashire town of Morecambe is holding a Shakespeare Festival over the weekend of 22-24 April. The town is to be congratulated on a really ambitious programme with a fantastic amount of Shakespeare-related activity going on. I particularly like the publicity image which gives a nice nod to Eric Morecambe, and the optimism of the Festival name Bard by the Beach. Examples of what’s on offer include: a version of Henry V adapted for a cast of 70-80 young people, Romeo and Juliet being turned into “an hour of comedy, tragedy and sausage rolls”, a one-man Midsummer Night’s Dream, and Macbeth the Scottish panto. There are also lots of workshops and other interactive events for all ages.

Also happening around the time of Shakespeare’s birthday is a piece of theatre based on Hamlet. Something Rotten – Hamlet’s Uncle Gets his Say at Last! Is written and performed by Robert Cohen and will be at the Georgian Theatre Royal, Richmond, 20 April. “Claudius of Denmark: incestuous, fratricidal traitor or hard-working patriot unafraid of tough decisions? Writer-performer Robert Cohen takes you behind the scenes at Elsinore, replaying the events of Hamlet through the eyes of the prince’s uncle-turned-stepfather, and attempting to answer some of the questions left hanging by Shakespeare: Why did Claudius murder his brother? How long had he and Gertrude been consorting? How did he get on with Hamlet prior to the recent unpleasantness? And how did Yorick end up in that grave? “

We all know that Macbeth is supposed to be unlucky, bringing down disaster on anyone quoting from it in a theatre unless as part of the play itself. Exploring this idea, The Macbeth Curse will be staged at the Octagon Theatre, Bolton, from 19-23 April. “ It’s 1902 and when Sir Alphonse King and his Sixty Minute Shakespeare Ensemble start rehearsing Macbeth for a Royal Command Performance they find themselves struggling against spookily unexpected circumstances. While Lady Macbeth is busy complaining about Sir Alphonse’s ego and Macduff is playing the fool to keep everyone’s spirits up, mild-mannered stage manager Miss Jessica Peacock has to battle her stage-fright to save the show. But with an actor missing, props breaking in their hands and ghostly goings on growing by the minute, the entire troupe begin to fear the worst. Have they fallen foul of the infamous Macbeth Curse? In a chaotically condensed version of Shakespeare’s own words and integrated with Musical Hall songs and cutting-edge Edwardian theatricality, Terry Deary’s brand new play is a perfect introduction to the magic and madness of Macbeth. Recommended for age 7 years and over.

It’s particularly refreshing to see companies adopting a less than reverential approach to Shakespeare, having fun with his work and turning the plays into something distinctly their own. These are only a few examples of what’s going on in the North of England over the next couple of months: do enjoy them.

4 Responses to 2016 Shakespeare up north