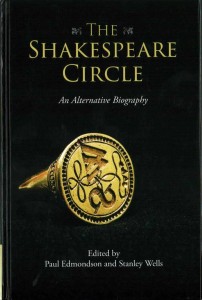 On 16 March 1810 “Shakespeare’s ring” was discovered near the Church in Stratford-upon-Avon. The story is told by Stratford historian and solicitor Robert Bell Wheler.

“Upon Friday, the 16th day of March, 1810, this ancient gold seal ring, weighing 12 dwts and bearing the initials “W.S.”engraved in Roman characters, was found by a labourer’s wife (named Martin) upon the surface of the mill close, adjoining Stratford’s Churchyard, being the exact spot whereon Mr Oldaker since erected his present residence. It may be remarked as a curious coincidence, that a man, named William Shakespeare, was working for Mr Oldaker in the same field at the very time the ring was picked up. He was a day labourer from the neighbourhood of Rowington, and might be a descendant of one of the numerous branches of the poet’s family. It had undoubtedly been lost a great many years, being nearly black; and though I purchased it upon the same day for thirty-six shillings (the current value of the gold) the woman had sufficient time to destroy the precious aerugo by consenting to have it unnecessarily immersed in aquafortis to ascertain and prove the metal at a silver-smiths shop, which consequently restored its original colour. It is of tolerably large dimensions, and evidently a gentleman’s ring of Elizabeth’s age…The connection or union of the letters by the ornamental string and tassels was then frequently used…Upon this seal ring being found it immediately occurred to me that it might have belonged to our immortal poet… After numerous researches into publick and private documents,I find no Stratfordian of that period so likely to own such a ring as Shakespeare…In his will he gives to several of his friends twenty-six shillings and eightpence each to buy them rings. It has been suggested that these seal-rings might have been one of those that Shakespeare thus directed his friends to buy in remembrance of him; a supposition very unlikely; because this is a seal-ring, which, though an ornamental article, was evidently intended for use; and it is not probably that those persons would have Shakespeare’s intitials reversed upon a seal which did not correspond with their own, as was certainly the case of the names mentioned in his will. To this will there is no seal affixed; but it is a singular circumstance that in the concluding part of it where the Scrivener had written “In witness whereof I have hereunto set my hand and Seal”. These words “and Seal” were struck out, and more strongly and remarkably confirm my conjecture that the Poet had then lost this Signet Ring.” 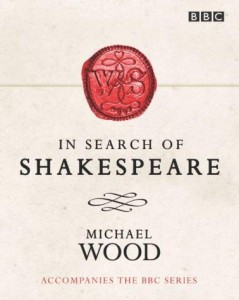 There is more information, including images, here. The ring remained an interesting curiosity, one of those objects with a possible but unproved link to Shakespeare, presented to the Shakespeare Birthplace Trust after Wheler’s death along with an enormous amount of material he had collected. Samuel Schoenbaum considerered the ring “highly dubious”, but Michael Wood, researching for his TV programme and book In Search of Shakespeare adopted the impression of the seal for the book jacket and many thousands of people will since have seen the ring itself on display in the Birthplace exhibition. It also features on the cover of the recently published book The Shakespeare Circle. While it makes no difference to Shakespeare’s work, it is a tantalising thought that this ring might have been on a finger of Shakespeare’s hand as he wrote.

Wheler’s account of the discovery of the ring was included in his 1814 Guide to Stratford-upon-Avon, and on 4 March 1818 the artist Benjamin Haydon wrote to the poet John Keats:  ‘I shall certainly go mad! In a field at Stratford upon Avon, in a field that belonged to Shakespeare; they have found a gold ring and seal, with the initial thus- W.S. and a true lover’s knot between; if this is not Shakespeare who is it? – a true lover’s Knott!! I saw an impression to day, and am to have one as soon as possible – As sure as you breathe, & that he was the first of beings the Seal belonged to him – Oh Lord!’

After the discovery, Wheler must have searched high and low in the Stratford records for a document sealed by this ring. As a solicitor and the town’s main historian he had access to the local corporation records as well as legal documents. He found none, and neither has anyone else since.

This isn’t though quite the end of the story: in researching the lives of early members of the Shakespeare Club, of whom Wheler was one, I examined a few documents that came from his office relating to Charles Frederick Green, another early member. Attached to two of these documents are seals made from Shakespeare’s seal ring. The documents date from 1828 and 1834: one actually mentions Mr Oldaker, a banker, who Wheler talks about in his account of the discovery. Did Wheler, I wonder, bring out Shakespeare’s seal ring on special occasions, when dealing with a Shakespeare-loving client who would appreciate it?