Looking at death in Shakespeare’s life and works 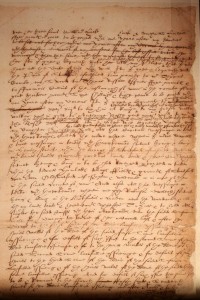 Page 2 of Shakespeare’s will

The exhibition By Me William Shakespeare puts on display his will, a rare opportunity to see this document, one of the National Archives’ most important. It’s also been the cause of much discussion over the years. Did Shakespeare only leave his wife his second best bed as a snub, or because it was their marital bed? Why are there no books mentioned in the will? And how wealthy was Shakespeare when he died?

The document itself has been closely examined and conserved over the last couple of years by the National Archives. Scientific analysis has uncovered new insights into the will and how it was created.  From this main page there are additional pages, such as this one on how they have approached conserving the will, and this one by Amanda Bevan, the National Archives’ head of legal records. She has come to the conclusion that the conventional dating of the will may be wrong. It’s always been an uncertain business, as the will has obviously been revised, with lots of interpolations showing that Shakespeare made additions as he perhaps remembered things he had forgotten, or changed his mind as circumstances changed. But she now believes that page two of the three-page document is a surviving section of an earlier will, while pages one and three were written in January 1616 and updated shortly before Shakespeare died.

It’s a fascinating story that could only be uncovered with the combination of modern scientific methods married to years of experience of how historic documents were created.

Next week, on 22 April, an exhibition will be opened in Oxford that “confronts the theme of death itself in Shakespeare’s works”. The Bodleian Libraries’ exhibition is entitled Shakespeare’s Dead, and looks at death in the plays.  Romeo and Juliet, Macbeth and Hamlet will feature in particular, each exploring different aspects of the anticipation of death, the moment of death, and mourning.  The exhibition will run until 18 September 2016.  The Bodleian is to be congratulated for not avoiding difficult subjects. “Shakespeare’s Dead also looks at last words spoken, funerals and mourning as well as life after death, including ghosts and characters who come back to life. These themes will be explored using key items from the Bodleian’s famous literary collections that include Shakespeare’s First Folio and the first Shakespeare playbook (Romeo & Juliet), a number of early editions and an extensive collection of plays and poetry by Shakespeare and his contemporaries.”

It will be good to see items from the Bodleian’s rich collections on display. A series of events are being put on to complement the exhibition including a lecture by Jonathan Bate on Shakespeare’s Magic and in May a lecture on Death in Early Modern England, showing the hazards of simple activities like gathering water. A source for the drowning of Ophelia in Hamlet was possibly the drowning of Katherine Hamlett in the Avon a couple of miles upstream of Stratford when she went to the river to fetch water. This well-known case occurred while Shakespeare was a teenager, and was heard in Stratford. As with Ophelia, there was some discussion about whether she had taken her own life, or simply slipped.

While on the subject of Shakespeare in Oxford, there are many events going on in the city this year and the Shakespeare Oxford website has all the details. 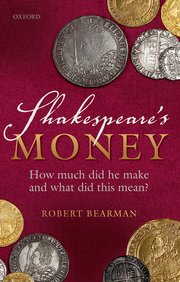 A book recently published by Oxford University Press also looks at the subject of Shakespeare’s death not through what he wrote, but what he left. Shakespeare’s Money: how much did he make and what did this mean? is the latest book by Archivist Dr Robert Bearman. By examining all the available documentation in detail, and using his knowledge of Shakespeare’s life and the period in which he lived, Bearman attempts to settle the debate about whether Shakespeare was hugely wealthy or not, about his social standing, and whether his father did indeed suffer a collapse in his business. For centuries his father’s financial problems have been seized on by biographers searching for a reason why Shakespeare might have left Stratford for London, and why he might have pursued a coat of arms for his family. Bearman’s book is unusual for his refusal to speculate on this issue, but his pursuit of the truth is fascinating and raises many questions that biographers have tended to avoid.

Lastly, while we’re thinking about Shakespeare’s death, visitors to Stratford on 23rd will also be treated to a combination of mourning and celebration as a jazz funeral will be staged with musicians from New Orleans for the first time taking part in the Shakespeare Birthday Celebrations.

This entry was posted in Legacy, Shakespeare's World. Bookmark the permalink.