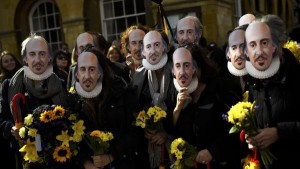 As I’m writing Radio 4’s Sunday Worship is coming from Holy Trinity Church in Stratford-upon-Avon, just one of the many special events that are marking the 400th anniversary of Shakespeare’s death on 23 April 1616.

I took part in the traditional procession, starting from the town centre and walking down to Shakespeare’s grave yesterday through streets packed with thousands of people. I was marshalling, which means I was partly responsible for making sure people got to their flagpole positions, pulled their flags, and moved off for the walk to the Church. The groups I was looking after included one delegation from China, girls from the Stratford Girls Grammar School and an unofficial group of Russians.

Later in the day I returned to the church to find, hours after the procession had ended and the chancel was full of flowers, that there were still queues of people waiting to view the grave, and I was told it was the same at Shakespeare’s school, full to bursting.

I’d like to congratulate everybody who took part in the organisation of the Birthday Celebrations, including the Town and District Councils, King Edward VI School, and Shakespeare Birthplace Trust: this is a huge event for a small town to organise and I can’t remember a happier Birthday.

The big event of the day was of course the RSC/BBC collaboration Shakespeare Live, a star-studded evening featuring a huge range of actors and performers including many of our most well-known Shakespearean actors. I particularly loved the piece, scripted I imagine by the wonderful Tim Minchin, on Shakespeare’s “To be or not to be” that featured a wealth of Hamlets past and present (and some who should have been), and a real live prince. Too many lovely things to mention, but I really enjoyed the short films shot at the Birthplace properties with smashing script delivered by the smashing Joseph Fiennes (Anne Hathaway’s Cottage and Mary Arden’s Farm looking glorious), and Henry Goodman and Rufus Hound performing the wonderful double-act “Brush Up Your Shakespeare” from Kiss me Kate. Many, many other highlights, and the great news is the whole thing is available on IPlayer here.

Meanwhile the celebrations continue: just one of many treats is going to be a new play: A Play for the heart: the Death of Shakespeare, on Radio 3 at 9pm tonight, recorded at Mary Arden’s Farm.