Commemorating Shakespeare in metal and print 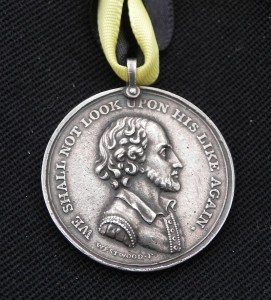 Whenever we come to commemorating a Shakespeare anniversary, the question is always about how this should be done, that perhaps comes down to what exactly we are celebrating. This year we are marking 400 years since Shakespeare died, but should we be doing so by thinking about the man’s life, about his written work, about the work on stage, about his reputation or some kind of abstract idea of what Shakespeare means in our twenty-first century world.

I’ve been thinking recently about the earliest Shakespeare celebrations, and how they developed over the period from the mid-1700s to the mid-1800s. David Garrick’s 1769 Shakespeare Jubilee in Stratford was the first major celebration of its type, and it’s been interesting to see how much what David Garrick did influenced the celebrations that followed, and, more strangely, still do. In The Making of the National Poet Michael Dobson called Garrick’s a “strictly metropolitan triumph”, and so it was, importing actors, musicians, workers and even pastry cooks from the capital. Garrick did more than that, however, as he found many of his ideas for the Shakespeare Jubilee in the world of the London theatre, and the attractions offered by the great pleasure gardens of Ranelagh and Vauxhall. Here the genteel could walk in specially-created groves, listen to musical recitals, eat and drink, watch fireworks, enjoy the spectacle of illuminated transparencies and paths lit up by thousands of lanterns. Many of the same elements would appear in Stratford, as did controlling the natural landscape: the trees on the far bank of the Avon were cut down because they spoiled the view. While composing this man-made scene, he did not take into account the fact that the Avon, is capable, after rain, of breaking its banks, changing from being the “soft-flowing” river of Garrick’s Ode into a powerful, swift-moving flood.

One of Garrick’s innovations, that quickly caught on, was the creation of a Jubilee medal. Unlike almost everything else, these were from the Midlands, being made in Birmingham, a centre for metal-working, and the rainbow-coloured ribbon with which the medals were worn was made in the nearby city of Coventry in which ribbon-making was one of the most important industries. After Garrick’s, each Shakespeare Celebration had its own medal: one was struck in 1816 (the bicentenary of Shakespeare’s death), and several appeared in the 1820s when celebrating Shakespeare’s birthday in Stratford became quite an obsession. The medal-wearing obsession reached a peak in 1830 when the Committee of the Shakespeare Club rode on horseback, in the procession, “each wearing a scarf of rainbow-coloured riband, and a medal suspended from the neck by the same silken material”.

The medals usually featured a portrait of Shakespeare on one side, with perhaps a quotation. “We shall not look upon his like again” , from Hamlet, was the quote on the Garrick medal, and on the reverse wording describing the event being commemorated. Nowadays most of the medals we see are worn by members of the armed forces, by  civic dignitaries or by sportsmen. Most of us show our allegiance to particular causes by the wearing of pins, or, informally, T-shirts. It doesn’t mean, though, that commemorative objects are no longer being made which show our interest in anniversaries. Three new £2 coins have been created by the Royal Mint to mark the Quatercentenary. The coins illustrate Shakespeare’s comedies, histories and tragedies. John Bergdahl chose for his designs props, tools of the actor’s trade: “I hope I have conveyed that sense of them being abandoned but for a moment, ready to be brought back to life as the play goes on, just as his work is brought alive time and again”. A Jester’s hat and stick symbolises Comedy, a sword thrusting through a coronet as it topples to one side for History, and the skull, combined with a rose, to capture the sense of doomed romance for Tragedy. An additional commemorative five-ounce coin, designed by Tom Phillips features a version of the Droeshout Engraving from the First Folio, with the quotation “Put money in thy purse” around the circumference. The commemorative coins are all available from the Royal Mint now, and the two-pound coins will enter circulation soon. 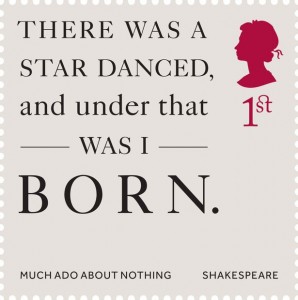 One of the Royal Mail’s commemorative stamps for 2016

I’ve been interested to see the approach of the Royal Mail when it came to issuing commemorative items. Postage stamps have been issued bearing the face of Shakespeare, of his characters, and of actors in famous roles. For this year, the stamps have gone back to Shakespeare’s words, and they’ve come up with some lovely ideas. Famous quotations, in a variety of decorative fonts, selected for their relevance to letters and cards. How about a birthday card sent in an envelope bearing a stamp that reads Beatrice’s line “There was a star danced, and under that was I BORN”, a Valentine’s Day card with a stamp quoting lines from Romeo and Juliet, “Love is a smoke made with the fume of sighs”, or a letter to an old friend with the stamp “But if the while I think on thee, dear friend, all losses are restored and sorrow’s end”, from Sonnet 30. They’re delightful, and remind us that, in fact, whenever we’re marking a Shakespeare anniversary what we really have to celebrate is his uniquely memorable words.