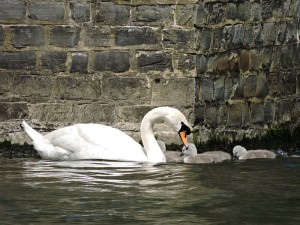 Over the past few weeks my husband Richard has been keeping an eye on a pair of swans, nesting just downstream of Holy Trinity Church in Stratford-upon-Avon. Stratfordians are quite protective of their swans, not least because of their connection to Shakespeare, the “sweet Swan of Avon”. It’s particularly fitting that this next is so close to Shakespeare’s Church, yet in a quiet stretch of river where it is to be hoped they will be relatively undisturbed.

To his delight, on Wednesday, the mother swan had moved off the nest to reveal four fluffy cygnets. The next day there was no sign of the babies, the mother bird protecting them just as Shakespeare describes: 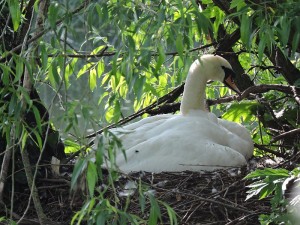 So doth the swan her downy cygnets save,
Keeping them prisoner underneath her wings.

Swans are just one of the species of birds Shakespeare mentions, and many of them are singing their hearts out at the moment. Along the river, wrens “with little quill” are often seen are seen and heard as are blackbirds with their “orange-tawny bill”, sparrows, dunnocks (or hedge sparrows), swallows, the lark “that tirra-lirra chants”, the croaking raven, and many more. With songbirds in decline it’s heartening to see they are still around, but how many more there must have been in Shakespeare’s time.

On Friday 27 May the swans were seen out on the river with now, six cygnets. It’s great to see these beautiful birds thriving.

I’m including a few of his photographs, all taken, I hasten to note, from quite some way away to avoid worrying the birds. Enjoy your Bank Holiday, however you choose to spend it! 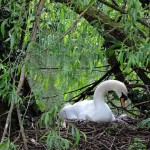 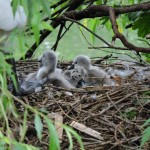 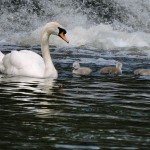 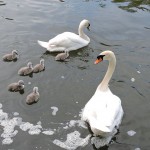 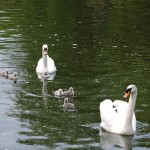