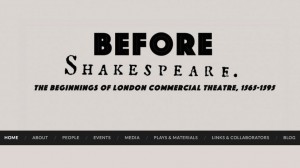 A few weeks ago a new website launched, the public face of a project run by academics Andy Kesson and Lucy Munro with the aim of “rethinking the start of the public theatre in Britain”, that is “the playhouses that open in and around London in the second half of the sixteenth century”. The project, inevitably, is called Before Shakespeare. Although it will provide additional research into the background to Shakespeare’s career (he’s called one of the second generation of people working in the playhouses) and the buildings in which his plays were performed, he will not be its focus. To quote the website again:

Those playhouses feel new in their architectural specificity, their sheer number, their investment in the problem of how you make money from a building primarily devoted to performance and how you entertain thousands of people with fictional or semi-fictional stories. Above all they feel new in their position in the class structure of their time: these buildings and the playing companies are run by working people trying to pull in other working people to come and see their shows. Whilst historians of this period get nervous of the term ‘working-class’, this seems a distinctively working-class movement at a time when most people had little access to the stories, ideas and characters the playhouses were committed to exploring.

One of the resources to be used by the project is the archaeological discoveries being made by Julian Bowsher and his fellows at Museum of London Archaeology (MOLA). And by a terrific coincidence, just this week there has been some fascinating news of one of those excavations, that is already forcing academics to have a bit of a rethink. It was announced on 17 May 2016 that the excavations of London’s Curtain Theatre in Shoreditch, north of the Thames, show the building to have been oblong rather than circular, as had been assumed. Shakespeare’s company used this theatre for a while before the Globe was ready to move into, and Henry V is thought to be one of the plays that might have premiered there. 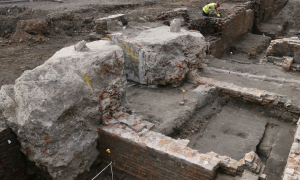 Some of the newly-discovered walls of the Curtain Theatre

You will remember that at the start of the play the Chorus encourages us to imagine that we are not in a playhouse, but on the battlefield.
Can this cockpit hold
The vasty fields of France? Or may we cram
Within this wooden O the very casques
That did affright the air at Agincourt?
The Guardian, in its report, reports on Julian Bowsher’s consternation at finding that the foundations and wall are unmistakeably not those of a circular structure. “There is going to have to be a certain amount of revision of the chapter on The Curtain in my book,” Bowsher said. “It now seems clear that the playhouse was a conversion of an earlier tenement – essentially a block of flats – and was later converted back into a tenement again.” Perhaps, he speculates, the prologue was written specially for performances at the new Globe Theatre. The whole story is set to provide academics with masses of food for thought and discussion. This is all great fun, and if you want to find out for yourself they are offering free public tours of the site on Fridays until 24 June. Places must be booked at the MOLA website.

The Before Shakespeare project isn’t just about theatres, but about the plays and the people who worked in them. There is already online a list of plays from the period, a timeline and a bibliography, so much to explore. This blog, from the Illuminations team, highlights the plays by John Lyly, and includes links to several performance videos and interviews on the subject. Lyly is just one of the first generation of writers for the playhouses, whose work is very much, and unjustifiably overlooked in the obsession with the writings of Mr Shakespeare. 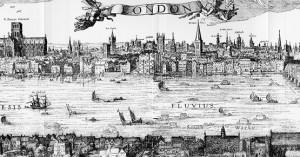 A view of London and the Thames

And finally, in another great piece of timing given the Curtain discovery, on Saturday 21 May Shakespeare’s Globe is hosting a symposium on the subject of another of those early London playhouses, the Rose, on the 400th anniversary of the death of Philip Henslowe, who build and managed the theatre. Uniquely, his accounts and papers, known as his “Diary” still survive. It’s sure to be a fascinating day in which the latest discoveries will be shared.

One Response to Theatre Before Shakespeare