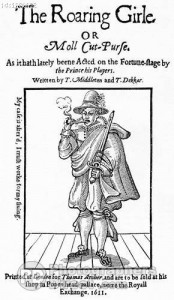 The first edition of The Roaring Girl, 1611

On Friday evening, 10 June, I was sitting on the sofa reading the chapter in Stanley Wells book Shakespeare & Co on Thomas Dekker, when the news came on the TV that Wells had been granted a Knighthood in the Queen’s Birthday Honours List. Wanting to find some background for this blog post, his book was (as so often) my first port of call. Stanley Wells has a long history of interest in Thomas Dekker, having some years ago edited The Shoemaker’s Holiday with Robert Smallwood for Manchester University Press.

The reason why I was researching Dekker is that for the next three weeks the Shakespeare Institute in Stratford-upon-Avon is embarking on what has become an annual event, a Marathon reading of the plays of one of Shakespeare’s contemporaries. Previous subjects have been John Fletcher, Thomas Heywood, and Philip Shirley. This year it’s Dekker’s turn.

Dekker’s an interesting figure, though his life is shadowy. He is supposed to have been born in 1572, in London, but nothing is known of his life or education until 1598 when he is mentioned by theatre manager Philip Henslowe. Dekker was a freelance writer: the unkind might call him a hack, but although Dekker seems to have been continually in debt he was also much in demand. In the same year, Francis Meres listed Dekker alongside Shakespeare as one of “our best for tragedy”. Many of the plays he wrote were collaborations, and only relatively few ever made it into print, so we can’t judge how fair Meres’ estimate was. Dekker is thought to have been born in London, and to have often written about it, as with The Shoemaker’s Holiday and The Roaring Girl. He was a hard worker: in 1599 alone Wells reckons he was involved to some degree in eleven plays. At the end of the year he had the excitement of having The Shoemaker’s Holiday performed at court in front of Elizabeth 1.

His only established collaboration with Shakespeare was Sir Thomas More (and Shakespeare’s involvement in this is still controversial). Dekker’s contribution is more confidently asserted because more examples of his handwriting still exist. 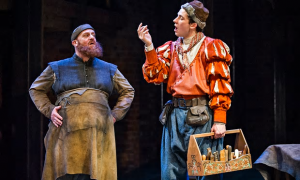 Some of Dekker’s plays are occasionally successfully revived. The Royal Shakespeare Company performed a season of Dekker plays in 2014-5 that featured The Shoemaker’s Holiday, The Roaring Girl and The Witch of Edmonton.

His satirical pamphlets tell us much about life in Elizabethan and Jacobean London. The Gull’s Hornbook of 1609 contains a chapter on “How a gallant should behave himself in a playhouse”. From this we know about how the money was collected, about rushes being strewn on the stage, and about how the well-off could pay to make themselves a nuisance by sitting on the stage for the performance.

In spite of being constantly in debt, and imprisoned for several years between 1612 and 1619, he was well paid for some of his work. He wrote the annual pageant for the Lord Mayor of London on four occasions, in 1629 being paid £180 for writing London’s Tempe, the final piece being read at the Marathon.

He is said to have collaborated in the writing of around 240 plays. The Institute will be reading the 30 that still exist, that he is known to have had some hand in.  They’ll be read aloud, in chronological order, an exercise that “enables us to observe, in concentrated form, the development of a single dramatist’s imagination and technique, and to experience a large number of neglected plays by a significant talent of the Shakespearian era.” Dekker’s plays are very approachable: they “are noted for their engagement with the experience of ordinary people as well as for their masterly treatment of a wide range of genres.” As well as plays that can with certainty be attributed to him, the Marathon will include others which are less sure, “the experience of reading them in the context of the confirmed Dekker canon may provide insight as to whether the attributions are reliable.” It’s going to be an interesting three weeks. Whether you want to join in, or just listen, you should contact Dr Martin Wiggins at the Shakespeare Institute, at  (m.j.wiggins@bham.ac.uk).  The schedule is as follows:
WEEK 1: ELIZABETHAN DEKKER
MONDAY 13 JUNE
10.30: A Warning for Fair Women
2.30: The Shoemakers’ Holiday

WEEK 2: EARLY JACOBEAN DEKKER
MONDAY 20 JUNE
10.30: Pageantry for the Royal Entry of King James I into London
2.30: The Patient Man and the Honest Whore