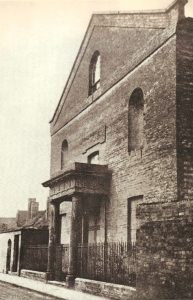 Stratford-upon-Avon’s early theatrical history is a subject that is often overlooked, dominated as it now is by the Royal Shakespeare Company. In fact the town’s first proper theatre opened in 1827 and was managed by a man whose name is never mentioned, Francis Raymond.

He had visited the town some years before, but he brought his Company to the fit-up theatre (a converted barn) in Windsor Street, Stratford in 1826, joining the Shakespeare Club and donating towards the 1827 Celebrations. When a permanent theatre building was proposed he bought two shares at a cost of £66 and was made its first manager. His wife also acted in the company. Stratford became part of his provincial circuit that included Northampton and Leicester. He was an energetic man: on 5 December 1827, he performed the leading role of Rover in Wild Oats in Leicester. Exactly a week later, on 12 December, he was to open the new Shakespearean Theatre in Stratford with a production of As You Like It. His roles included vigorous young men such as Gratiano in The Taming of the Shrew, Laertes in Hamlet and Cassio in Othello, which he played opposite William Macready on his visit to the town in 1829.

Stratford formed just part of a circuit of Midland theatres, including Leicester and Northampton, run by Raymond. Each of them would host performances for only a few weeks at a time: he occupied the Stratford theatre for no more than three months a year. He also appeared elsewhere: in January 1829 he appeared as the Duke of Aumerle in the great Edmund Kean’s production of Richard II at London’s Covent Garden.

By 1829 Raymond was having financial difficulties but in 1830 he was partly responsible for the success of the Celebrations in Stratford, his company of professional actors appearing as Shakespearean characters in the procession, as well as taking part in entertainments in the town. If this was a gamble, it failed to pay off as Raymond left the town shortly afterwards. This witty speech, made at the Shakespeare Club’s dinner was in a way his swan song.

“Mr Mayor and Gentlemen – “The Tempest” of approbation which has followed the announcement of a name so unworthy as my own, has left me “a bankrupt in thanks” like the Merchant of Venice. You cannot expect me to philosophize like Hamlet, or meditate like Macbeth; yet I am as grateful as Pericles; but were I to talk myself black in the face like Othello, my efforts to express my gratitude as I could wish would only prove Love’s Labour’s Lost. Our worthy President and his able supporter, like The Two Gentlemen of Verona, have vied with each other to make the evening pass exactly As You Like It. The Chronicles of England, from Lear and Cymbeline, up to King John, and through the Henries and Richards, to the reign of Henry the Eighth, were but a Comedy of Errors; until illustrated by William Shakespeare; yet the events of this day will serve to enliven many a Winter’s Tale, when life has passed away from us like a Midsummer Night’s Dream. Were I Romeo, and Juliet was to elope with Titus Andronicus, – or Troilus, and Cressida was to go off with Timon of Athens, – I would not trouble myself about the taming of a Shrew; but in the enjoyment of this moment leave to amuse themselves like The Merry wives of Windsor, and support the misfortune with the pride of a Coriolanus. Nay, were I a Julius Caesar, I would not exchange the honour you have just conferred upon me to pass my Twelfth Night with Antony and Cleopatra!

I fear I have unwarrantably intruded on your patience, but as I had no other claim to your notice, I borrow a few Titles to your kind attention. I would fain have given you Measure for Measure, but as All’s Well that Ends Well, I shall conclude by offering you my heartfelt thanks, or you may accuse me of making Much Ado About Nothing. 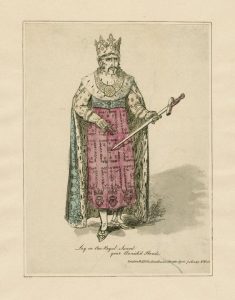 By September 1830 he had left the town, and during 1831 he was employed by Madame Vestris, with whom he had worked before, in The Royal Olympic Theatre, London.

In 1832 he became involved in petitioning Parliament with a view to loosening the rules by which the Patent Theatres of Covent Garden and Drury Lane were allowed to perform a wide range of plays while the “Minor Theatres” in London, were severely restricted, affecting their ability to work. A Parliamentary committee was set up to look into the issue but it was another decade before change occurred.

Later in 1832 Raymond was declared insolvent. He carried on acting, records showing him spending much time on tour, especially in Scotland and Ireland. The theatre brought great rewards to the few, but many like Francis Raymond experienced uncertainty and the indignity of being declared bankrupt, while at the same time bringing up a family.

Mr Raymond’s story will form part of “Long life to the club call’d  Shakspearean”: the story of the Shakespeare Club of Stratford-upon-Avon, by Susan Brock and Sylvia Morris, to be published in autumn 2016. Details will be found in due course on the Club’s website.

I’m indebted to Viv Lake, a descendant of Francis Raymond, for providing me with a mass of information about his life outside Stratford.