Shakespeare and the referendum

The knives have certainly been out since the Referendum vote on 23 June, and in the last week the Shakespearean references have been flying thick and fast, though the whole concept of a referendum would have been completely alien to Shakespeare. He did, though, always have something to say about power struggles, and by Sunday morning there had been so many that on Radio 4’s 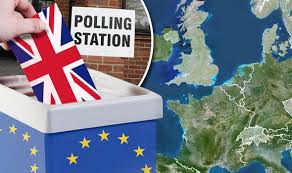 Broadcasting House they presented a sound collage of quotes from recent events interspersed with lines from Shakespeare. As Paddy O’Connell suggested, “Let’s get the Shakespearean overtones out of our system”. It featured quotes from a variety of plays: Richard II’s “Let’s talk of graves, of worms, of epitaphs”, Richard III ‘s ambition, finding parallels in many of those seeking the Tory leadership:
Why, then, I do but dream on sovereignty;
Like one that stands upon a promontory,
And spies a far-off shore where he would tread,
Wishing his foot were equal with his eye,
And chides the sea that sunders him from thence,
Saying, he’ll lade it dry to have his way:
So do I wish the crown, being so far off;

Much later, before the battle of Bosworth when allies have deserted Richard III:
March on, join bravely, let us to’t pell-mell
If not to heaven, then hand in hand to hell.

It ended with a quote from that most depressing of political plays, Troilus and Cressida. Ulysses’ great speech on degree is about respecting authority, knowing your place in a highly stratified society, but his comments on the results of political upheaval are strikingly relevant to today’s circumstances.

How could communities,
Degrees in schools and brotherhoods in cities,
Peaceful commerce from dividable shores,
The primogenitive and due of birth,
Prerogative of age, crowns, sceptres, laurels,
But by degree, stand in authentic place?
Take but degree away, untune that string,
And, hark, what discord follows!…
Strength should be lord of imbecility,
And the rude son should strike his father dead:
Force should be right; or rather, right and wrong,
Between whose endless jar justice resides,
Should lose their names, and so should justice too.

The Shakespearean quote game began when, commenting on Michael Gove’s apparent betrayal of his son, Boris Johnson’s father quoted the dying words of Julius Caesar, stabbed in the back by his closest ally “Et tu, Brute”. Boris himself quoted a bit from Brutus’s speech about seizing opportunity: 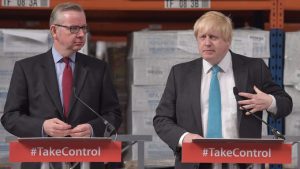 Michael Gove and Boris Johnson on the campaign trail

There is a tide in the affairs of men,
Which, taken at the flood, leads on to fortune;
Omitted, all the voyage of their life
Is bound in shallows and in miseries.
On such a full sea are we now afloat;
And we must take the current when it serves,
Or lose our ventures.

Does Boris see himself as the great leader, Julius Caesar, or as the unlucky Brutus, who does the wrong thing for what he thinks is the right reason? Boris certainly knows his Shakespeare, and it was reported a year ago that he had been commissioned to write a biography of Shakespeare for 2016, for which he had been paid £500,000. He might have missed that deadline, but assuming he writes the book now he has a bit more time it is certain to be a best-seller. Biographies often reveal more as much about the author as the subject, and this might well be the case.

Boris knows the power of words, and how rhetoric can be used to create an argument to sway your listeners. More than Julius Caesar, or Brutus, he reminds me of Mark Antony, charismatic, but not particularly strong on detail. Shakespeare gives him some of his most persuasive speeches in the scene in the Capitol, that begins “Friends, Romans, Countrymen”:
I come not, friends, to steal away your hearts:
I am no orator, as Brutus is;
But, as you know me all, a plain blunt man,
That love my friend; and that they know full well
That gave me public leave to speak of him:
For I have neither wit, nor words, nor worth,
Action, nor utterance, nor the power of speech,
To stir men’s blood: I only speak right on;
I tell you that which you yourselves do know;

Antony remains a dominant figure to the end of Julius Caesar, the young Octavius Caesar seeming to respect his experience. Once we move into Antony and Cleopatra, though, the relationship between Antony the great persuader and Octavius the real politician, disintegrates. Octavius accuses Antony of character flaws that prevent him being a serious politician, just as Michael Gove did to Boris Johnson:
to confound such time,
That drums him from his sport…, – ‘tis to be chid:
As we rate boys, who being mature in knowledge,
Pawn their experience to their present pleasure,
And so rebel to judgement”.

The coming weeks and months are likely to provide many more examples of Shakespeare’s relevance to our political upheavals. Where will it all end? Shakespeare’s plotters generally get their come-uppance, but not before much blood has been shed.