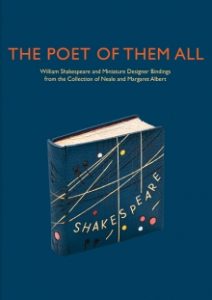 The Poet of them All

They say all the best things come in small packages, and it’s certainly true that we all find small things, that seem to defy the normal, fascinating. It’s easy to see why some things, like miniature paintings, came to exist: these jewel-like objects could be worn, creating a very personal connection between the wearer and the subject.

So why are miniature books so popular? A quick search on Google will turn up all kinds of results, but nobody buys a miniature book, surely, to read it? I’ve seen and examined several different miniature editions of Shakespeare’s plays, with and without little stands to arrange them on, and have always found them charming if not very practical.

I was intrigued to be sent a copy of The Poet of Them All: William Shakespeare and Miniature Designer Bindings from the Collection of Neale and Margaret Albert, and although I was sceptical at first I quickly became enchanted by these lovely little objects. 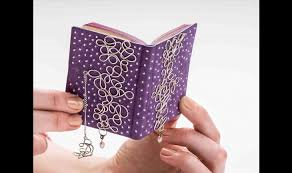 The Taming of the Shrew

The private collection is soon to be acquired by the Yale Center for British Art. Each of the books is less than three inches in height, intricately decorated and designed with both creativity and skill. Bookbinding is a very practical craft, and one of the fascinating elements of the book is that the expertise of the bookbinder is shown off in descriptions and photographs showing the books being created. Each binder explains the idea behind their work. These tiny objects are like little jewels. 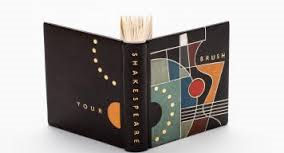 Derek Hood’s Brush Up Your Shakespeare

The story of the different books is interesting in its own right. Neale Albert, who knows he is addicted, took sets of miniature Shakespeare editions and asked binders to rebind them, without any constraints other than asking them to do their best work. One edition was Knickerbocker’s Shakespeare, an American edition from 1910, another was published in London in 1825. Neale also gave bookbinders copies of a miniature illustrated book published in 2009, containing the music and lyrics to Brush Up Your Shakespeare, the famous song from the Cole Porter musical Kiss Me, Kate. What’s fascinating about these is to see how different are the thirty-nine imaginative responses he has got to the same book. Some have rearranged the pages concertina-style, some have cut-outs, and fold-outs, and many have responded to the music or the comedy of the song itself. 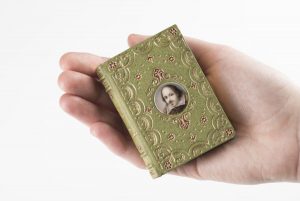 Derek Hood’s version of Brush Up Your Shakespeare includes references to “the staccato dots of the spat shoes and the angular zoot suits worn by the gangsters”, while Robert Wu’s, used for the book jacket, plays with the musical and text elements. Jenni Grey’s The Taming of the Shrew is bound in lilac, a colour chosen to reflect the feisty attitude of the play’s heroine, while the twisted wire refers to the constraints that try to suppress her personality. The little green Julius Casear text, by Santiago Brugalla, is tooled in a much more traditional style with a portrait of Shakespeare in the centre.

The exhibition of these gorgeous miniature books is open until 21 August 2016 at the Yale Center for British Art, 1080 Chapel St.,New Haven, Connecticut, 10 a.m.-5 p.m. Tuesday-Saturday, and noon-5 p.m. Sunday. 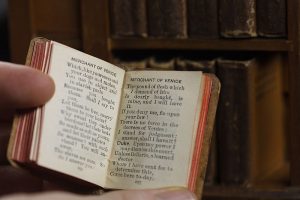 The 1904 Merchant of Venice

As it happens, one of the venues receiving a copy of the First Folio on loan, as part of The Folger Shakespeare Library’s celebrations for 2016, is also including an exhibition of miniature texts.  The Albert & Shirley Small Special Collections Library at the University of Virginia is making its own unique contribution to the festivities with the exhibition, Shakespeare by the Book: Four Centuries of Printing, Editing, and Publishing.

The exhibition is in three sections, one of which includes a large number of miniature editions. The Illustration shows their copy of The Merchant of Venice from the 1904 Ellen Terry edition. At the other end of the scale the exhibition also includes examples of the Boydell Shakespeare Gallery prints, images large enough to hang on a wall.

It will run until December 31st 2016, with the Folger Shakespeare’s Library’s First Folio making its appearance for the month of October.