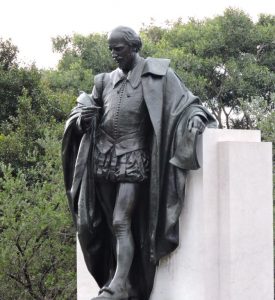 And now, as they say, for something completely different. I’m at present holidaying on the other side of the world in Australia and I’m currently in Sydney. Inevitably there has had to be a search for Shakespeare.

The main Shakespeare memorial is a sculpture of the man with five of his most famous characters clustered around him: Falstaff, Portia, Hamlet, Romeo and Juliet. The setting is reminiscent of the Gower memorial in Stratford-upon-Avon, where an elevated figure of Shakespeare, quill in hand, is surrounded by the characters. There Falstaff and Hamlet are seen along with Lady Macbeth and Prince Hal. Originally the statues in Stratford were closely clustered around the main figure, as the ones in Sydney are, only being moved further away around 1932 when the whole monument was moved away from the theatre following the fire and rebuilding that turned the focus of the theatre towards the canal basin as it remains today. The statues in Stratford were also at one time fenced off so that people couldn’t get close to them, and this is also, thought not intentionally, the case with the Sydney memorial which is now isolated in the middle of a busy road, where it was relocated in 1959 in order to allow the building of the expressway.
The area is now called Shakespeare Place, and is sited between the Royal Botanic Gardens and the State Library of New South Wales. The following details are adapted from a the City Arts Sydney website that contains lots of interesting information about the many monuments in the city. The Shakespeare Memorial was commissioned by Henry Gullett, a former president of the Shakespeare Society of New South Wales. He held the view ‘that statue was the finest memorial that any generation of men could raise to one of their own race who had greatly deserved of them’. He was integral in beginning negotiations with Sir Bertram MacKennal for the casting of a replica in bronze, of a Shakespeare memorial statue that he had made for India. 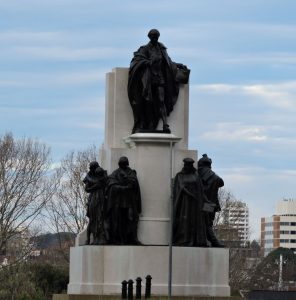 The whole of the Sydney Shakespeare Monument

Sculptor Sir Edgar Bertram MacKennal (1863-1931) was the most successful Australian artist of his time, and is still arguably the best known of Australia’s sculptors. Born in Melbourne, he studied at the National Gallery School and Victorian Academy, and in 1883 at the Royal Academy and British Museum in London.
Working mostly in Europe from 1882 Mackennal executed many private works and public monuments, and with the patronage of King George V became a leading civic sculptor in Britain. He was the first Australian to be elected an associate of the British Royal Academy, the only Australian to be elected to full Royal Academy membership, and the first to be knighted.
The project was halted abruptly when Gullett died of heart failure in August 1914. Endeavouring to realise their father’s objective, the women of Gullett family maintained contact with MacKennal, who continued to work on the statue despite the War and numerous other commissions.
The marble pediment, after being cut and polished in Italy, was shipped to Sydney c.1924 and was placed in storage. The five bronze figures, which were cast in England, arrived soon after.
It’s great to find Shakespeare here, though it’s a pity he is probably only glimpsed fleetingly by the thousands of people who pass him ontheir daily drive to work. I found more Shakespeare nearby, and I’ll be reporting on that Shakespeare connections in my next post.

2 Responses to Shakespeare in Sydney 1