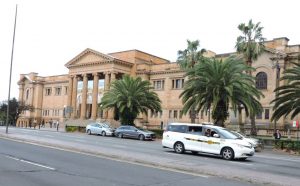 On Tuesday we visited what is called on the website, “one of the most unusual places in Australia”, the Shakespeare Room at the State Library of New South Wales, that stands just across the road from the Shakespeare monument I wrote about last time. The Shakespeare Room was originally intended to celebrate the Tercentenary of Shakespeare’s death in 1916, but was only actually opened in 1942. It was designed to house the collection of David Scott Mitchell, after whom the whole Mitchell Wing of the Library is named. He collected books over a number of years in the early years of the twentieth century, with a number of people working to help him track down the volumes he wanted to acquire. Among these items was a complete set of all the Shakespeare Folios, the four collected editions published before 1700. 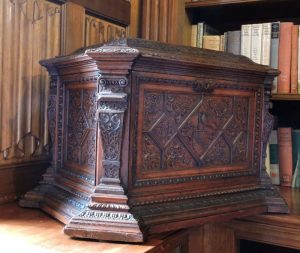 The box that carried the First Folio

The Library still holds these, among the most treasured items in their collections. On permanent display in the room is a facsimile of the First Folio, and the original magnificently-carved wooden box which was created in order to ship the original volume to Australia, a wonderful reminder of how much Mitchell valued the book.

The Facsimile is left open at the speech from As You Like It, “All the world’s a stage”, because also in the room is a set of stained glass windows depicting the seven ages. 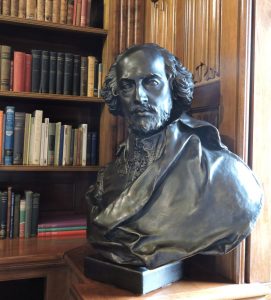 The copy of Roubiliac’s bust

The image shows the central panel including the lover, the soldier and the Justice. This speech is one of the most popular subjects for stained glass: in Stratford-upon-Avon there is another example on the staircase up to what used to be the 1879 theatre.

As well as the monument standing just outside the building, there is also a bust of Shakespeare inside the room. It’s a fine replica of the bust made in the first half of the eighteenth century by French sculptor Louis Francois Roubiliac, that depicts a refined gentleman in the same tradition as the Westminster Abbey statue. The bust was originally donated to the Library by Sir Richard Owen in 1857, and was actually put in position in 1955.
Another great feature of the room is the little wooden chair that sits unassumingly in the corner. Visitors are asked not to sit on it, and no wonder. Set into the back of the chair is a sliver of  “Shakspeare’s Wood”, said to be a bit of the mulberry tree from Shakespeare’s garden at New Place. It was lovely to find a little bit of Stratford-upon-Avon over here in Sydney, though whether it is original or not is very much in doubt as so many wooden souvenirs were said to have been created from one tree that it has often been said there must have been a forest of them. It’s fitting, though, that this possible link with Shakespeare’s home is to be found here. 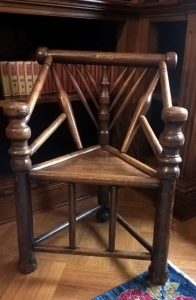 The chair including Shakespeare’s wood 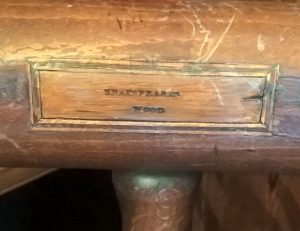 The sliver of Shakspeare’s Wood

The whole room is very reminiscent of the Shakespeare Room, newly rebuilt, that sits atop the Library of Birmingham. Both have elaborately-carved bookshelves, created to hold precious volumes of Shakespeare plays and books about him. We were told that the wood used is Tasmanian Blackwood, dyed in order to have the appearance of English Oak. Like the Birmingham Library, the actual volumes are nowadays safely stored in secure and air-conditioned stacks where they can only be consulted with special permission. The books in the room are all modern duplicates from the collections. For many years after it was created the Sydney room was used as a scholarly space for the study of special materials, but now it is open for visitors to see one day a week, and is also used for special events, again like the room in Birmingham. 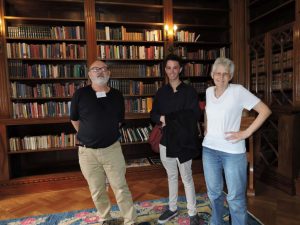 Me with our guide Thomas and another visitor

We greatly enjoyed our visit to the Library including the Shakespeare Room and would like to thank our guide Thomas for telling us its story. It was heartening to see so much interest in this room from the many visitors who passed through while we were there, a tribute to the collecting passion of David Scott Mitchell who wanted to ensure there was a place for Shakespeare in Australia.

4 Responses to Shakespeare in Sydney 2