The Welsh band of brothers: Euro 2016 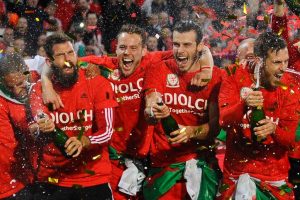 In my last post, I noted lots of Shakespeare references relating to the fallout from the Referendum, but this hasn’t been the only current event to provoke a Shakespeare quote.

The Referendum quotes have all been about treachery, division and political upheaval, so it has been refreshing to hear the Wales football team described as a “band of brothers”. Like Iceland, the Welsh team have shown how it should be done, playing as a team, showing commitment to each other both on and off the field. It’s made them both popular and successful in spite of being tiny nations. Gareth Bale, the undisputed star of the Welsh side, has been self-deprecating in interviews, always talking about how they enjoy living and working as a team.

Henry V understood that being a great leader means involving all your troops, and also had Welsh ancestry, making the quotation doubly appropriate. Shakespeare gives the Welsh Captain Fluellen some lovely moments to talk about being Welsh, and not just the jokes about eating leeks.

The Crispin Day speech, delivered before the battle of Agincourt, contains some of the most stirring lines Shakespeare ever wrote:
Old men forget: yet all shall be forgot,
But he’ll remember with advantages
What feats he did that day: then shall our names.
Familiar in his mouth as household words
Harry the king, Bedford and Exeter,
Warwick and Talbot, Salisbury and Gloucester,
Be in their flowing cups freshly remember’d.
This story shall the good man teach his son;
And Crispin Crispian shall ne’er go by,
From this day to the ending of the world,
But we in it shall be remember’d;
We few, we happy few, we band of brothers;
For he to-day that sheds his blood with me
Shall be my brother; be he ne’er so vile,
This day shall gentle his condition.

“Band of Brothers” is a phrase that’s been quoted in many contexts, including being the name of a war mini-series made by Steven Spielberg and Tom Hanks in 2001, based in World War II. The series closely identified not just with the sentiment, but with the speech itself, one character delivering the speech in the last episode.

With the contest for a new leader of the Conservative party now in full swing, people are looking, above all, for the candidate who will unite the party. Quite a task. Some of those still in the race fall far short of inspiring loyalty in the way Shakespeare’s Henry V does.

The semi-final between Wales and Portugal kicks off at 8pm on Wednesday, and the team and their supporters are hoping their spirit will see them through to the final. I’m no football supporter, but I’m going to have my fingers crossed for them.