World War 1, Shakespeare and the Anzacs

Townsville’s Memorial to those who died in World War 1

As I write this, our time in Australia is coming to an end. Our final stop has been Townsville, in Northern Queensland, where the Australian Chamber Music Festival has been held each year for over 20 years. We have been enjoying wonderful music at the concerts, many featuring my husband’s niece, violinist Tasmin Little who has travelled here from the UK with her family to take part.
Without her suggestion we would never have visited  this area, but we’ve been impressed with the beautiful coast, hills and the winter warmth. Before we arrived we knew  nothing about the area, but it turns out that Townsville is home to Australia’s largest army barracks, with a military museum at Jezznine Barracks near the sea looking towards the absolutely beautiful Magnetic Island, and a Garden of Remembrance at Anzac Point at the other end of the Strand, another long section of palm-shaded beach.
We weren’t able to get to the museum, that features exhibits about the history of the Australian army covering the late 1800s, the Boer War, both World Wars and other conflicts particularly in Asia. The Jezznine Barracks have been there for over 120 years.
I was particularly interested to find out about this history because before leaving the UK I had been reading a chapter in Andrew Maunder’s new collection, British Theatre and the Great War, which had an Australian and New Zealand connection. Ailsa Grant Ferguson’s chapter “Entertaining the Anzacs” explained how during World War 1 two centres were created in London for troops on leave, providing shelter and entertainment. Those for the Australians and New Zealanders were the Aldwych Hut (at one time the Aldwych Theatre was taken over for their use), and the Shakespeare Hut in Bloomsbury.  While the Aldwych Hut and the theatre was “a place in which Anzac cultur, via concert parties, was performed”, the Shakespeare Hut often featured Shakespeare. The Hut had a rather makeshift auditorium that could nevertheless seat over 500 troops, and many of the stars of the West End stage such as Ellen  Terry, John Martin-Harvey and Johnston Forbes-Robertson appeared in honour of the troops. 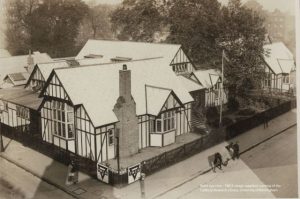 The Shakespeare Hut was built in mock-tudor style, with helf-timbered walls and gables, and the purpose-built performance area. It “presented a particular brand of Englishness via Shakespearean performance”, but the aim was not simply to promote the British Empire, dominating the far-flung areas of the world. Ferguson recounts how one New Zealand soldier, taken on a visit to Stratford-upon-Avon, was invited to inscribe his name on the window of the Birthplace, an honour only normally granted to the most distinguished visitors. He was seen as a representative of New Zealand’s contribution to the war, and his signature was a significant “new Anzac mark on a highly symbolic English heritage site”.
One of the most intriguing areas was the contribution of women. The 15-year-old Fabia Drake, who went on to be a most distinguished actress (Lady Macbeth at the new Memorial Theatre in the 1930s for instance), performed as Henry V at the Shakespeare Hut. She recounts “Edy Craig had the inspiration that I should come out in front of the curtain and speak the Agincourt speech to my Army on the floor… Four hundred war-weary men rallied to the cry of “God for Harry, England and Saint George”, springing to their feet and cheering to the rafters”. This performance took place after the end of hostilities on 23 April 1919. 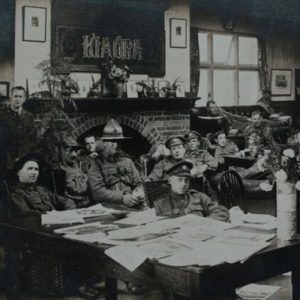 The inside of the Shakespeare Hut

The Huts themselves were demolished after the war, but by coincidence an exhibition celebrating their history is about to be launched at the London School of Hygiene and Tropical Medicine which now stands of the site of the Shakespeare Hut. This will reproduce one of the rooms in the Hut. Rebecca Tremain is leading the project and says:
The project will lift the lid on what life was like for those who used the building, and relive stories of those who fought and lived through the Great War. After the installation closes, photographs and recordings will be on display at the Camden Local Studies and Archives Centre where they will be stored to cement the legacy of the Hut, ensuring the public can enjoy its fascinating history for many years to come.
Not surprisingly, Dr Ailsa Grant Ferguson is an advisor to the project.
It’s fantastic that the School is celebrating the history of this forgotten but wonderful building. London was a dangerous place for recuperating servicemen. Soldiers, especially those so very far from home as the Anzacs, were lost in London and faced many dangers including being robbed or beaten up. The YMCA aimed to offer a safe place for the men to sleep, socialise and enjoy a little home comfort.

It’s great that this project will remind both the English and those from Australia and New Zealand of a bit of nearly-forgotten history when Anzac troops contributed, many making the ultimate sacrifice,  to a war in Europe, half a world away.