Howard Davies outside The Warehouse, 1978

On 25 October 2016 theatre director Howard Davies died at the age of 71. He had a full and successful career working in theatres around the country, but for me he is associated with the Royal Shakespeare Company during what Sally Beauman called “an explosion of vitality”.

Although I’d visited the RSC a number of times in Stratford, it was while living in London in the late 1970s that I became a real RSC enthusiast. I loved the productions at the Aldwych Theatre but the Warehouse, newly converted into a studio theatre by the RSC, was the most exciting venue I’d ever been to. It was run by Howard Davies. The Warehouse (now the Donmar), received productions that had started at The Other Place in Stratford and also put on new productions, and here Davies brought in a policy of producing plays by contemporary British writers as well as work by more established political authors.  Among those showcased by Davies were Peter Flannery (Savage Amusement), Howard Barker (That Good Between Us), Barrie Keeffe (Frozen Assets) and David Edgar (The Jail Diary of Albie Sachs).  He built a particular relationship with Edward Bond, and at the RSC he directed many of Bertolt Brecht’s plays (Man is Man, Bingo, The Days of the Commune, Mother Courage). His first Shakespeare production on the main stage was Macbeth, with Bob Peck. When he directed Henry VIII the following year with Richard Griffiths as Henry, John Thaw as Wolsey and Gemma Jones as Katherine, it was not surprisingly described as “Brechtian”. Rather than presenting a series of magnificent tableaux Davies’s Henry was an intelligent, temperamentally withdrawn man moving, as Robert Cushman put it, “from dependence to despotism”.

At least part of the Company’s vitality was created by Davies’s work at the Warehouse. Writing in the 1978 RSC Yearbook at the end of the first Warehouse season he commented on the need to “demonstrate the range and versatility of our present acting company, and engender the excitement that comes from juxtaposing new and untried work with the well-tested, well-assimilated work of the previous season”, a process he described as “cross-fertilization”. Again quoting Sally Beauman, “Davies…wanted …to encourage writers to be part of the rehearsal process, so that plays might be considerably changed by rehearsal discoveries…. The Warehouse was to be a workshop as much as a showcase, and this first season was remarkably innovative…. It was an unapologetically Socialist season of new work that was a considerable break with anything the RSC had attempted in the past”. The company’s studio work had a direct effect on the rest of its work that only subsided when the Swan Theatre, with its completely different feel and aims, began to take over from 1986. 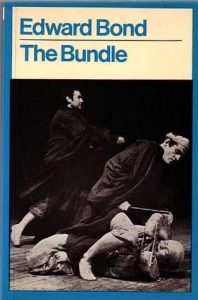 For me, as a member of the audience, mostly interested in the classical repertoire, the Warehouse work was a real eye-opener. Here it was possible to see top-notch acting at very close quarters and I well remember the excitement of seeing Jane Lapotaire and Zoe Wanamaker in Piaf, a transfer from Stratford’s Other Place of Pam Gems’ play on the sometimes grimy life of Edith Piaf, Peter McEnery in Jail Diary, and most excitingly Mike Gwilym, Patrick Stewart and Bob Peck in Edward Bond’s powerful play The Bundle, specially written for the new theatre. The plays put on at the Warehouse tended to examine social, eithical and political issues of the day. Jail Diary was based on the experiences of a man imprisoned in South Africa in the 1960s, and The Bundle, set in medieval Japan, looked at the moral dilemmas raised by the issues of poverty, social inequality and revolutionary violence.

Davies was clearly also an actor’s director, managing to get together astonishing casts for his plays. After his time at The Warehouse he continued to work with the company, directing one of its most successful productions, Les Liaisons Dangereuses at The Other Place in Stratford in 1985. From there the production went to London where it continued to be performed for several years, and to the USA (where a new production from the Donmar is coincidentally being staged in October 2016). The stellar cast included Lindsay Duncan, Alan Rickman, Juliet Stevenson, Fiona Shaw and Lesley Manville. In the same year Davies also directed a remarkable production of Troilus and Cressida on the main stage in Stratford with many of the same actors: Juliet Stevenson as Cressida, Rickman as Achilles, Lindsay Duncan as Helen, and another favourite, Anton Lesser as Troilus. Both productions featured elegant, unfussy sets and beautiful costumes that complemented rather than drawing attention away from the actors. 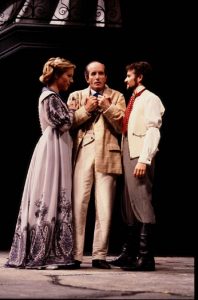 The production divided the critics, but I loved it. Criticism centred around Stevenson’s Cressida, “a human being torn between love and survival, rather than a flirtatious plaything”. This interpretation might seem unexceptional today, but at the time it felt revolutionary. According to Michael Billington “Gone is the usual wanton flirt. Her love for Troilus is real and urgent, their enforced separation leads to hysterical breakdown and the famous scene where she is kissed by the Greek generals is tantamount to rape… Ulysses’s description of her as a daughter of the game becomes the violent reaction of a man humiliated by being expected to beg a kiss”.

Davies’s last work for the RSC was The General from America in 1996/7, but it’s his earlier, extraordinary work for the Company that many will also remember with admiration.