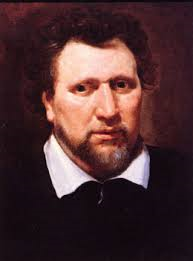 As well as being the 400th anniversary of Shakespeare’s death, 1616 is also a significant date for anyone interested in the theatre and writing of the period. Between 6 and 25 November 1616 Ben Jonson’s Workes was published, a monumental 1000-page volume whose title promised serious literature, but, unusually, included nine of his plays. Shakespeareans are keen to note that this book gives us evidence of Shakespeare’s own acting career, since he appears in the cast lists for Every Man in his Humour and Sejanus. But Jonson’s Folio is more significant that this, its publication sometimes being described as a watershed. Up to this time plays were seen as ephemeral, published (when they were) as flimsy, unadorned texts, and Jonson suffered no little teasing for his presumption. After Jonson’s book was published others could follow his lead, particularly in the case of the 1623 Shakespeare First Folio. Jonson had taken a close interest in the production of his Folio, a possibility denied to Shakespeare and bemoaned by John Heminges and Henry Condell, who took the work on themselves. After Jonson’s death a second folio was published, including a great deal of extra material, and in 1647 Beaumont and Fletcher’s work was also gathered into Folio form.

On 12 November a day conference is being held to celebrate the 400th anniversary of Jonson’s Folio, at the University of Sheffield’s Centre for Early Modern Studies. The conference brings together specialists from a range of disciplines both to explore the text of the Workes and to consider Jonson in relation to the wider social and cultural forms of his day. These include music, the visual arts, clothing, and drinking, as well as the multimedia performance that was his 1618 walk to Scotland. The day is being split into three parts: the first on Jonson, books and editing, the second on Jonson and other media (music, dress, painting) and the third on Jonson and sociability that will look at the Ben Jonson’s Walk to Scotland project that I’ve written about before, and another that I haven’t heard of,  entitled “Intoxicants and Early Modernity”.

Places seems still to be available (only £15 including lunch) from the University of Sheffield’s Online Store where you will also find more details of the speakers. It sounds as if it will be an enlightening day!

One thing they seem not to be tackling, perhaps because it’s such a large subject, are the plays themselves and their afterlife on the stage. Jonson’s plays have proved popular, especially in Stratford where a great many have been performed. In 1937 Everyman in His Humour was presented in the new Shakespeare Memorial Theatre, and Volpone was staged in 1944 and 1952 (with Ralph Richardson in the title role). The Other Place too proved a successful venue for Jonson, especially Volpone with Richard Griffiths. The opening of the Swan Theatre in 1986 brought in a golden period for the exploration of the plays of Shakespeare’s contemporaries, particularly Jonson. Everyman in his Humour formed part of the Theatre’s opening season and since then there have been successful productions of The Alchemist, Bartholomew Fair, Volpone, Eastward Ho!  and many others. 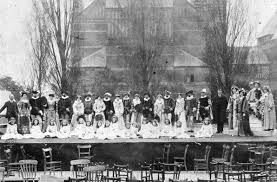 Predating all of these, though, was a production of Jonson’s masque Pan’s Anniversary, given an outdoor production on 24 April 1905 on the Bancroft Gardens. It was written around 1621, too late for Jonson’s 1616 Folio, but was published for the first time in the 1640 posthumous edition.

The masque is set in Arcadia, in a classical pastoral setting, featuring nymphs, a shepherd and a swordsman. With much music and dance, the masque contrasts the pastoral setting of Arcadia with warlike Thebes. As with many masques, Jonson’s aim was the flatter King James I, seen in the guise of Pan, and his pacifist sentiments.

The performers were amateurs, joined by a few actors from Frank Benson’s acting company, but Ralph Vaughan Williams and Gustav Holst, no less, were brought in to write suitable music. The Stratford Choral Union provided the chorus and orchestra and the Bidford Morris Men, dancing to their own music, were cast as the warlike Thebans. Forgotten today, this was a significant national cultural event, promoting the idea of “Merrie England” and the new interest in English folkdance and music that was soon to be taken up by Cecil Sharp. The ambitious performance was organised by Stratford’s Shakespeare Club, the brainchild of Mr F W Evans who was one of the committee, and other members of the Club took part: for instance Henry Hickling, the Club’s Secretary, played the Shepherd.