November 1 2016: the official publication day for The Story of the Shakespeare Club of Stratford-upon-Avon, 1824-2016, the book on which Susan Brock and I have been working for the last eighteen months. While researching the history of the Birthday Celebrations we became intrigued by the forgotten side of the Club’s history. Up to that point we knew the bare facts of the Club’s early existence: it had been founded at the Falcon Inn, and had originated the Stratford’s Shakespeare Celebrations. 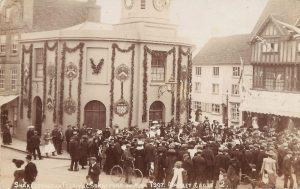 The 1907 Celebrations showing the top of Bridge Street

Most interestingly, the early members of the Club who set all these things in motion were not the gentry but regular townspeople. Most of them were local tradesmen: butchers, grocers, bakers, stationers, with a few teachers and one or two landowners. After a period of stagnation, in the early years of the twentieth century numbers grew as local people were drawn in to organising the Birthday Celebrations organised by the Club. Ordinary people, including, I found, some of my own ancestors, used their talents to help celebrate the Birthday of the town’s local poet in their own way. It was their unacknowledged commitment, through the efforts of the Club, that made the Birthday Celebrations so successful. The discovery of these stories encouraged us to refer to the book as “an alternative history of Stratford-upon-Avon”.

To find out more, including details of how to buy a copy, visit the Club’s website, www.stratfordshakespeareclub.org, and this page on my website.