The Trial of Hamlet 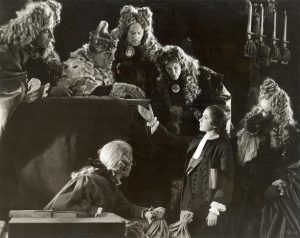 Dorothy Tutin in The Merchant of Venice, Shakespeare Memorial Theatre, 1960

Shakespeare knew that trial scenes made great theatre, often putting them at the heart of his plays. Probably the most dramatic courtroom scene is the trial of Antonio in The Merchant of Venice, but the trials of Queen Katherine in Henry VIII and that of Hermione in The Winter’s Tale are also memorable, as are scenes that follow the same format like that which ends Measure for Measure. Today we continue to be fascinated by trials both fictional and real, with all the procedures reported in detail including the giving of evidence, cross-examination of witnesses, the summing up and the delivery of the verdict. 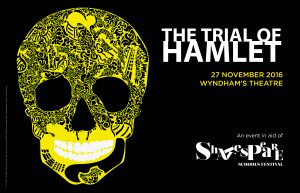 On Sunday 27 November at 7pm a different sort of Shakespearean trial will be staged at Wyndham’s Theatre in London. This time Shakespeare’s most famous character Hamlet goes on trial for murder, treason and regicide, and best of all the entire audience have the opportunity to give their verdict. The aim of the evening is to raise money to support the annual Shakespeare Schools Festival which helps 30,000 young people around the country. A tremendous cast of actors, comedians and lawyers are coming together to make it happen. Actors playing the leading roles will include John Heffernan as Hamlet, Meera Syal as Gertrude and Tom Conti as Claudius. Comedian and actor Hugh Dennis will be the jury foreman who will return the audience’s verdict and stand-up comedian Lee Mack will play the Player King. It is promised that there will be other familiar faces among the jury. Lady Justice Hallett, a court of appeal judge, will be in charge with four QCs, John Kelsey-Fry, Jonathan Laidlaw, Shaheed Fatima and Ian Winter doing the interrogating. Jonathan Myerson has written the piece, and Elayce Ismail is directing, with young people from Shakespeare Schools Festival also taking part.

As well as raising money for a great cause, the lawyers taking part hope to demonstrate the similar skills required onstage and in the courtroom. It’s hoped that mock-trials like this one will stimulate an interest in the law and Lady Justice Hallett has said “I relish the opportunity to combine my two loves of the law and the theatre on the West End stage and will ensure Hamlet gets a fair trial.” It will centre on Hamlet’s fatal stabbing of Polonius, with John Kelsey-Fry arguing for an acquittal.

The outcome is by no means certain: 2015’s similar mock-trial of Macbeth featured Christopher Eccleston as Macbeth and Jeremy Paxman as the Jury Foreman, and the not guilty verdict must have surprised many of those taking part. There’s more information on the Shakespeare Schools Festival site and that for the Criminal Bar Association. Last year’s trial was a sellout and it would be surprising if this year’s was not equally successful.