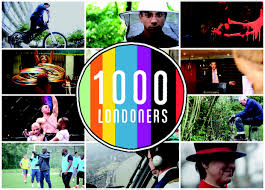 I’m grateful to Jill Little for letting me know about a fascinating ongoing project which, at the end of this important year, is highlighting Shakespeare’s connections with London.

The digital project is 1000 Londoners, in which every week a profile of a Londoner is posted on the home page. This profile includes a three-minute film about the person, including their views of life in London. A quick bit of arithmetic indicates that it could take nearly twenty years for the project to be completed, during which the capital will certainly have changed enormously. This is also the amount of time that it’s thought Shakespeare lived and worked in London from roughly 1590-1610. This period included the end of Queen Elizabeth’s reign and with it the Tudor dynasty and the start of the Stuart dynasty beginning with the Scottish King James 1. During this time the artistic life of London, most notably marked by the flowering of the popular theatre, also developed out of all recognition.

Over the period it runs, 1000 Londoners is sure to reflect changes in the city, taking in all ages, religions, race, interests and opinions, and will provide a unique digital portrait of the city and the nation for examination by students in the future. The project involves a wide range of partners and supporters including City Bridge Trust, the Newcomen Collett Foundation,  the London Transport Museum, the London Boroughs of Southwark and Wandsworth, and the British Library. The project is managed by South London based film production company Chocolate Films that both produce the films and provide opportunities to young people and community groups to make their own short documentaries. The project is also supported by Film Hub London and the British Film Institute.

In the next few weeks five Londoners who have been directly inspired by Shakespeare in their lives and work are being profiled. The first is already there,  #181 being Wills who is a production designer at Shakespeare’s Globe. He will be followed by theatre critic Mark, and Dennis who teaches Shakespeare to young people in his community to reduce gun violence, Benjamin, a drag king who performs at the Royal Vauxhall Tavern, and Gordon McMullan the founder of the Shakespeare 400 programme, from the London Shakespeare Centre at King’s College London.  They are certainly diverse, though it’s a pity none of them are women. Each one will feature on the home page for a week, and all the profiles are searchable. They are also posted on YouTube. If you want to catch all of them as they are posted you can sign up to receive them regularly.

2016 has been a momentous year for many reasons and this website is a fitting celebration of the vitality and diversity of our capital city, in which Shakespeare found fame and without which he might never have become Great Britain’s most enduring cultural hero.