Finding a place for Philip Larkin in Poet’s Corner 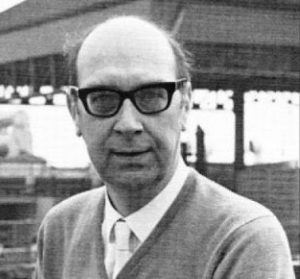 On Friday 2 December a ledger stone bearing the name of Philip Larkin will be placed in Poet’s Corner, Westminster Abbey, alongside writers such as Thomas Hardy, Edmund Spenser and of course William Shakespeare. There has been quite a lot of discussion about his being “welcomed into the bosom of Britain’s cultural establishment”. Some of his beliefs (and some of his poetry) were controversial,  but in one poll he was voted the most popular poet of the last 50 years, and a spokesman for Westminster Abbey has said “The Dean feels now is the right time to memorialise Larkin. Whatever rows have taken place about his view the bigger picture is his poetry and what shines through is that he’s one of our greatest poets and should be recognised as such.”

It will be exactly 31 years since Larkin died, but it’s not unusual for it to take a long time. Poet’s Corner was established in 1556 when Geoffrey Chaucer’s remains were interred there, over 100 years after he died. It was this that created a fashion for other writers to be buried there, including Spenser, Francis Beaumont and Ben Jonson, but many others are remembered with some kind of memorial. With the walls full of statues and plaques, nowadays a simple stone is laid in the floor. 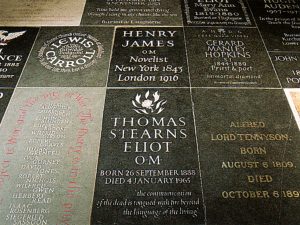 Ledger stones set into the floor of Poet’s Corner

Shakespeare’s memorial was placed there in 1740, and is one of the most instantly-recognizable images of the man, endlessly copied. The statue on Stratford’s Town Hall, placed there in 1769, is based on it. It was designed by William Kent and executed by Peter Scheemakers. The Latin inscription above the head of the statue, in gold on a panel of dark marble, can be translated : “William Shakespeare [erected] 124 years after [his] death by public esteem”. A group of ladies, admirers of Shakespeare, put pressure on for there to be a memorial to Shakespeare in London and the cause was taken up by others including Alexander Pope. Money was raised by a benefit organised by Charles Fleetwood of the Drury Lane Theatre and John Rich of Covent Garden Theatre. The monument was indeed put there by public esteem as the public contributed towards the cost, and no fee was charged by the Dean and Chapter for erecting it.

Shakespeare had died and was buried in Holy Trinity Church in Stratford-upon-Avon in April 1616. Some time after this date, William Basse wrote a poem suggesting that Shakespeare’s remains should be reinterred in the Abbey: 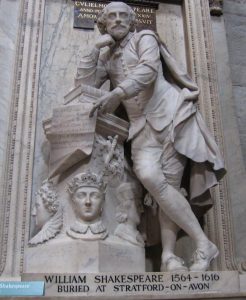 The Shakespeare monument in Poet’s Corner

Renowned Spenser, lie a thought more nigh
To learned Chaucer, and rare Beaumond lie
A little nearer Spenser, to make room
For Shakespeare in your threefold, fourfold Tomb.
To lodge all four in one bed make a shift
Until Doomsday, for hardly will a fifth
Betwixt this day and that by Fate be slain,
For whom your Curtains may be drawn again.
If your precedency in death doth bar
A fourth place in your sacred sepulchre,
Under this carved marble of thine own,
Sleep, rare Tragedian, Shakespeare sleep alone;
Thy unmolested peace, unshared Cave,
Possess as Lord, not Tenant, of the Grave,
That unto us and others it may be
Honour hereafter to be laid by thee.

But by the time of the publication of the First Folio in 1623 the monument to Shakespeare had been put up in Stratford’s church, and Ben Jonson, writing his dedication to Shakespeare in that book, dismissed the idea with some direct references to Basse’s poem.
My Shakespeare, rise; I will not lodge thee by
Chaucer, or Spenser, or bid Beaumont lye
A little further, to make thee a roome :
Thou art a Moniment, without a tombe,
And art alive still, while thy Booke doth live,
And we have wits to read, and praise to give.

Shakespeare’s family were keen to make sure that Shakespeare’s connection with Stratford was maintained by putting up a bust in his memory inside the church in which he had been baptised and worshipped. As Jonson noted, and as has been said endlessly since, it is his writings that are Shakespeare’s real monument. It’s a sentiment echoed again in that quotation about Larkin that “the bigger picture is his poetry”. It’s to be hoped that the monuments in Poet’s Corner are not simply admired for themselves, but encourage people to read what the writers commemorated there  wrote.