“The point envenom’d too” onstage fighting or the real thing? 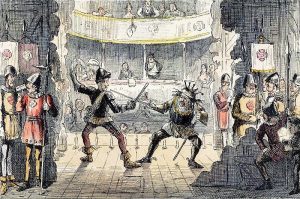 A Victorian staging of the Battle of Bosworth from Richard III

On 13 December 2016, the members of Stratford-upon-Avon’s Shakespeare Club will be able to get an inside view on the subject of staging battles and fights in productions of Shakespeare’s plays, from a man who really knows his subject. Alan Smith is the Head of the RSC’s Armoury and his position is unique, since no other UK theatre company has its own Armoury department. Then as now, battle scenes are popular and Shakespeare wrote many into his plays. The scenes are often crucial to the play, and when staged the details have to be are right.

There are the really important historic battles like Agincourt in Henry V and Bosworth in Richard III, but there are fights in many plays like Romeo and Juliet, Othello, Coriolanus, Macbeth and even the comic fight in Twelfth Night between the two reluctant participants Andrew Aguecheek and Viola. 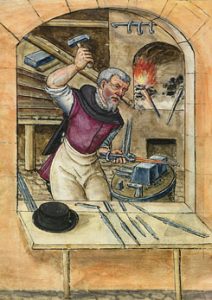 An image showing the making of a sword, from The Wallace Collection

A wide range of weaponry is required to cover all these styles from different eras and places, and it will be interesting to hear how Alan and his team approach this challenge. Shakespeare knew a fair bit about swordplay, and this post, written by Peter Tonkin, explains how during Shakespeare’s lifetime the new fashion for the rapier took over. While older swords had been short and broad, inflicting the sort of head and body wounds we now know killed Richard III (courtesy of the excavation at Leicester), the new fashion was for the narrow rapier with its pointed end that inflicted a completely different sort of wound as well as requiring totally different technique, that of fencing.

This page from the Wallace Collection in London, where they hold a magnificent collection of arms, explains a bit more about the weapons used at Agincourt,  and this is a more extensive explanation of the subject as it developed based on their 2012 exhibition The Noble Art of the Sword: Fashion and Fencing in Renaissance Europe.  The Wallace Collection currently has another exhibition on relating to arms, but looking in more detail about how some of the historic swords in their collection were made. It’s on until 26 March 2017. 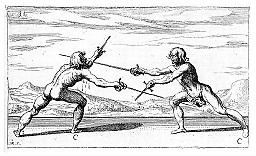 Back to Shakespeare and his knowledge of swordplay: this post looks at Shakespeare’s references to rapier fencing in great detail.  Shakespeare’s fights are rarely simply displays of skill, though these were popular in the early modern theatre. In Hamlet, the climax of the play comes with what could have been a formal display of fencing technique. Instead we have the added exciting twists of the plot by which Laertes poisons his foil and stabs Hamlet between bouts before, also using the foil, Hamlet finally revenges his father’s death. Just recently a number of posts of the SHAKSPER discussion forum have touched on the subject of how Shakespeare uses fights and the terminology of them to complement our understanding of the characters involved. It’s easy to subscribe to SHAKSPER in order to receive its regular postings.

This one, under the heading of Romeo and Juliet: Two Questions, has been looking at Shakespeare’s very subtle references to books or the phrase “by the book” in the play, but also examines the different styles of swordplay mentioned and how they are related to various characters – a distinction most of us miss since rapiers, swords and daggers are no longer the subject of everyday debate.

To hear Alan Smith talking about how the RSC tackles the issue of staging fights and battles, come along to the Shakespeare Institute in Stratford-upon-Avon at 7.45 pm on Tuesday 13 December. All are welcome.