The Story of the Shakespeare Club is launched 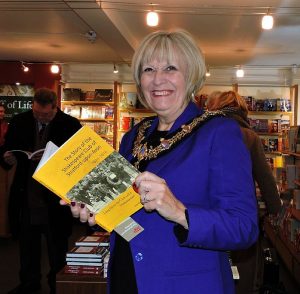 On Monday 28 November 2016 we held the official launch of the book The Story of the Shakespeare Club of Stratford-upon-Avon 1824-2016: Long life to the Club call’d “Shakspearean”, written by Susan Brock and Sylvia Morris.

It was an opportunity to celebrate the way the Club’s story is entwined with the history of the whole town and of some of its most important organisations. Several of them, including King Edward VI School, the Shakespeare Institute, and even the Swan of Avon Masonic Lodge were represented. The launch itself was held in the Shakespeare Birthplace Trust’s bookshop, where the book is now on sale. The Club’s closest link historically is with the SBT, as it first suggested the Birthplace should be protected by being taken out of private hands, then helped to fundraise for its purchase, and took responsibility for the building for nearly twenty years.

Our most honoured guest was Juliet Short, the current Mayor of Stratford-upon-Avon. It’s appropriate that she should have been there: she follows in the footsteps of Annie Justins, Stratford’s first woman mayor and ex officio president of the Shakespeare Club, shown on the cover of the book carrying the Club’s wreath in 1930.

From the earliest years of the Club, a number of members had also been on the Council, and it became the norm that the Mayor of the town should also be the President of the Club, this tradition only being abandoned in 1941 when it was decided that Presidents should be elected who were distinguished in the field of drama or literature. 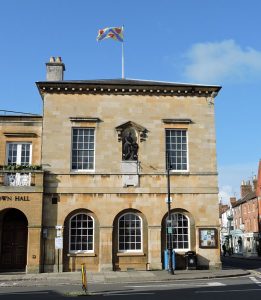 Club was also associated with the Council through the use of the Town Hall. Just two years after its foundation at the Falcon Inn, in 1826, the Club first held its grand dinner to celebrate Shakespeare’s birthday in the Town Hall, the main room of which was known as Shakespeare’s Hall. The Hall continued to be used for this purpose until well into the twentieth century, and monthly meetings were also held there from 1845 until 1874.

Being situated centrally in the town centre, the Town Hall was always highly visible during the Birthday Celebrations organised by the Club. During the early years of the twentieth century elaborate street decorations were put up in the main thoroughfares, the Town Hall being decorated with cartoons of the Seven Ages of Man in black and gold frames. These were painted by the young Bruce Bairnsfather who went on to be a hugely successful artist during World War 1.

In 1908 it was reported that “The chief incident of the day was, of course, the floral procession, …headed by the Grammar School boys, the Mayor of Stratford,…the members of the Shakespeare Club, and the visitors… in the afternoon the members of the Shakespeare Club held a reception in the Town Hall to which the visitors were welcomed by the Mayor”.

So the book may help to reconnect the Club with the other venerable organisations in Stratford-upon-Avon that together made the town the centre of the worldwide celebration of Shakespeare’s life and works. To find out more, go to the Club’s website  . Copies are available via the SBT bookshop or may be purchased directly from the Club.