Documenting the oldest Shakespeare organisation in the world

Regular readers will be aware that The Story of Stratford-upon-Avon’s Shakespeare Club, 1824-2016: Long life to the Club call’d Shakspearean has recently been published, documenting the history of the oldest surviving Shakespeare organisation in the world. The Club began as a small group of local tradesmen wanting to promote their own businesses as well as celebrating the life and work of Stratford’s most famous son. Some records still exist dating back to the foundation of the club and its first activities in the 1820s, and for over 150 years the Club’s archives have been kept by the Shakespeare Birthplace Trust. 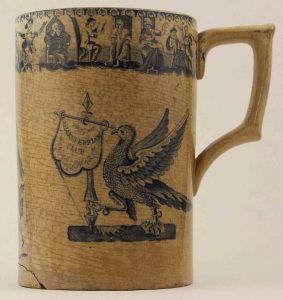 At 3pm on Tuesday 24 January 2017 the authors, Susan Brock and Sylvia Morris, will be giving a talk and display of related material at the Shakespeare Centre in Stratford-upon-Avon. The Collections Department of the Shakespeare Birthplace Trust will be bringing some of this historic material that we featured in the book out of its secure storage for the event. These will include the magnificent glass goblet given to the Club in 1830 to celebrate its outstanding success and a unique blue and white pottery tankard dating from the same period. Medals and ribbons created for members will also be on display, as will a range of images and newspaper cuttings of the Celebrations organised by the Club. Documents will include minute books, the handwritten list of the first committee, playbills, photographs and programmes for performances sponsored by the Club. All these reinforce the vital role taken by the Club in the development of the town as a centre for Shakespearean performance and celebration.

These items have never been displayed together to the public before, so this will be a rare opportunity to see them and to hear the authors talk about some of the mysteries they had to solve when researching this unexplored topic. The authors will also be bringing along their own personal items of historic Club memorabilia.

Friends of the Shakespeare Birthplace Trust will be admitted free of charge, but a small number of places are still available to the general public for £5 paid on the door. Because there is a limit on numbers, if you want to come along please email stratfordshakespeareclub@gmail.com  in advance.