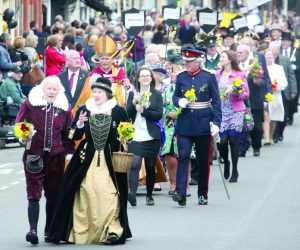 After the extravaganza that was 2016 it might be thought that Stratfordians would be putting their feet up for the Birthday Celebrations over the weekend of 22 and 23 April 2017. But no, I’m glad to report this year there will be some changes, and additional events to enjoy.

After three years of lunching in a magnificent solid marquee in the gardens near the church, a decision has been made to hold the luncheon on Saturday 22 April in the banqueting hall of the Crowne Plaza Hotel at Bridgefoot in Stratford (formerly the Holiday Inn). This will be a slightly more intimate affair with “only” 450 places, and a ticket price of £45 to include an initial glass of sparkling wine followed by the full luncheon. It’s being organised by Stratford Town Trust chairman Alan Haigh, who said in an interview with the Stratford Herald last year:

I wanted to reassure people that the 2017 luncheon would go ahead and I hope to make the event more open to the people of Stratford and aimed specifically at Shakespeare. The previous committee did a great job and organised some tremendous lunches but as we don’t have any big Shakespeare anniversaries coming up, now is the time to celebrate the ordinary birthdays with the Stratford people. 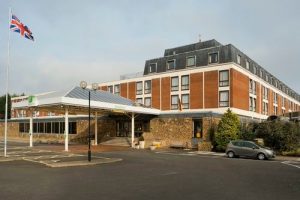 It’s hoped that there will be more community input this year and the Shakespeare Club is intending to display material about the Club’s history, closely involved as it is with the history of the Birthday Celebrations.  Alan has also had the delightful idea of carrying guests for the luncheon from the Church, where the procession ends, down to the hotel by boat.  It’s a fair walk and those taking part will already have spent over an hour on the traditional parade around the town.

Tickets will be sold through the RSC box office and will go on sale on Friday February 3rd. It isn’t clear whether these bookings will be available online as well as in person: there’s no sign of it yet on the booking page here but keep looking!  All other aspects of the lunch will be as in previous years with a number of speeches and toasts and the presentation of the Pragnell Prize. It should be a great event for lovers of Shakespeare.

This is all good news, but there’s more! 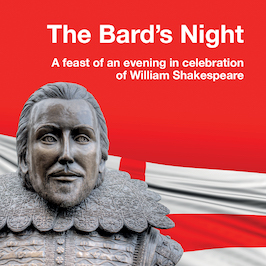 On the evening of Friday 21 April, that’s before the Birthday Celebrations, a new entertainment is to be put on at Stratford’s ArtsHouse. It is called The Bard’s Night, and will be “A Feast of an Evening Celebrating the Life of William Shakespeare”. It will feature a sumptuous three course dinner with wine, and performances from professional actors, dancers and musicians. As a finale to the evening the Methuen Shakespeare bust, with the players, the sponsors and selected VIPs will process by candlelight from the Atrium foyer to the centre stage. A specially-written tribute will be delivered and the audience will drink a toast, followed by three cheers, to the life of the genius William Shakespeare. Full details are available on the website, and the organiser, Gill Davies is currently offering four tickets for the price of three if people contact her direct. Otherwise tickets are already on sale via the ArtsHouse box office.

Eating and drinking have long been traditional elements of the Birthday weekend, and it sounds as if there will be plenty to enjoy this year.