Shakespeare at the close of 2016

The year in which we marked the 400th anniversary of Shakespeare’s death may be over, but there is still much to celebrate. The Folger Shakespeare Library in Washington, DC, is a great source of information about Shakespeare, and I subscribe to their bi-weekly newsletter Shakespeare Plus.  The current edition in January 2017 is available here and you’ll see it contains a real mix of material as varied as a link to a podcast on the making of the First Folio, an article about Elizabethan Christmas, another on Shakespeare in Hollywood and even a seasonal recipe. In the section on the highlights of 2016 I noticed a subject relating to Shakespeare’s life that I’d missed. Here’s their description:

You can see the documents on Shakespeare Documented, the largest and most authoritative collection of primary-source materials documenting the life of William Shakespeare, which the Folger launched this year in partnership with the Bodleian Libraries, British Library, Shakespeare Birthplace Trust, and The National Archives UK.

The New York Times piece explains that Heather Wolfe has discovered, among the archives at the College of Arms in London and other places, around a dozen manuscript versions of Shakespeare’s coat of arms, some of which are very early. One, complaining about Shakespeare’s right to a coat of arms, describing him as “Shakespeare, ye player”, can be reliably dated to around 1600 unlike the similar document held by the Folger which is thought to date from 1700. And most of them link the coat of arms to William rather than to his father John, officially named as the person responsible for seeking the arms, making it obvious that it was William who pushed the application through, doing a little social climbing. While the documents in themselves don’t provide any new information, Professor Alan Nelson finds it significant. It “helps to confirm everything we know about the arc of Shakespeare’s career and the way he understood himself in the context of his society,” he said.

If you’d like to get their regular updates, this is the address where you can give them your details. 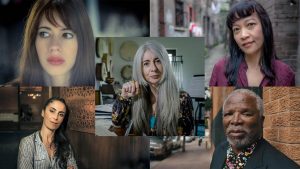 I’ve only just caught up with yet another of the BBC’s offerings for 2016, and it’s one that will remain available on the internet. It was entitled Living Shakespeare, and looked at Shakespeare’s impact across the globe. Filmed partly in Stratford-upon-Avon during the summer it takes five stories from China, South Africa, Lebanon, the UK and India and shows how Shakespeare is relevant to people’s lives. The programme begins with South Africa’s John Kani talking about playing Othello in apartheid Johannesburg in the 1980s, moves on to China where Shakespeare’s sonnets offered a voice to a gay woman when she felt herself to be an outcast in the 1980s. An Indian actress commented on how, in her country, “We are all modern Ophelias”, defined by the opinions of the men in their lives as either traditional and pure or independent and sultry. Profoundly deaf musician Evelyn Glennie finds that in The Tempest Shakespeare uses sound to colour his characters, with a vibrant use of noises and sounds. Finally a Lebanese choreographer noted that in her country “we really recognise his voice”, and created a dance version of A Midsummer Night’s Dream following the country’s civil war that heralded a time of peace. The conclusion, inevitably, is that all these people find that Shakespeare’s writing still speaks to people, particularly those who find themselves in opposition to the status quo in their own countries. We may all be quite relieved that 2016 is now over, but Shakespeare’s influence shows no sign of abating.

One Response to Shakespeare at the close of 2016