The Tempest in production 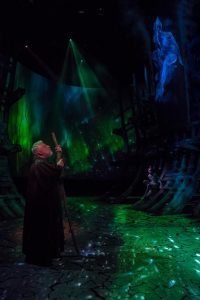 A scene from the RSC’s Tempest, Simon Russell Beale as Prospero

On Wednesday 11 January the Royal Shakespeare Company’s The Tempest is to be live streamed to cinemas around the UK. The play always brings with it a number of challenges, with its magical elements and the difficulty of putting a shipwreck on stage.

With its innovative use of technology it will be particularly interesting to see how it works on screen. The RSC’s collaboration with technology company Intel goes back at least two years. The inspiration was in fact the innovations of Shakespeare’s period:  Gregory Doran, who directs, says “Shakespeare includes a masque. They were then the multimedia events of their day, using innovative technology from the Continent to produce astonishing effects, with moving lights, and stage machinery that could make people fly, and descent from the clouds…So I wanted to see what would happen if the very latest technology could be applied to Shakespeare’s play today”.

However it isn’t the masque, or the opening storm scene, where the technology is most used, but in the character of Ariel. Using the expertise of The Imaginarium Studios they decided to think about Ariel as a digital character. Quoting from the programme, the Studios are “Pioneers in the art of  ‘performance capture’, (where an actor’s work is electronically tracked and translated into computer-generated imagery” and this is what has been done with the actor Mark Quartley. Sensors in his costume pick up his movements that are then rendered into the computer-generated character and projected live on stage. Somehow, we see both the real Ariel and one or more projected avatars on or above the stage. Combined with other projections and a magnificent set the result is a sumptuous theatrical experience.

The use of  special effects sometimes distances the actors from the audience, but this isn’t the case here. Mark Quartley copes well with being wired up for each performance, and Simon Russell Beale as Prospero is certainly not put off by the experience. He has said in the past that we should take liberties with Shakespeare in order to move with the times, and this production proves it can be done successfully. 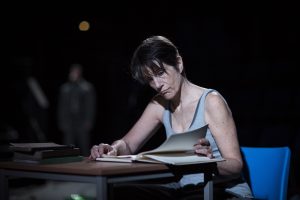 Just before Christmas I was lucky enough to be able to see both the RSC’s The Tempest and that put on by the Donmar at King’s Cross, and what a contrast there was. The Donmar’s production was the final part of a trilogy that also included Julius Caesar and Henry IV Part 1. The audience was led into a starkly-lit four-sided auditorium to watch a production put on by the inmates of a women’s prison. No sign of special effects here. Before the action started Harriet Walter (Prospero) introduces herself as a woman who has been in prison for decades, with no prospect of release. The prison bars are real and immovable, the action of the play created by the imagination of the participants. Shakespeare’s play ends with Prospero leaving the island, returning to Milan, but in this production Walter’s situation is closer to that of Caliban. All the other inmates are shown one by one joyfully leaving the prison until she remains desolate and alone.

Time and again, in both productions we are drawn back to Prospero, at the centre of the play. With no real drama within the story (Prospero is after all in charge), the conflict has to be within his mind. Harriet Walter, literally imprisoned, is powerless and angry. Simon Russell Beale always finds the humanity in every role, and enables us to see Prospero’s conflicting feelings: vengeance versus mercy to those who have done him wrong, happiness for his daughter versus sadness at losing her, returning to Milan versus losing his magic. His anger seems mostly to be aimed at himself, unable to resolve these conflicts.

Watching these two productions made me think back to other interpretations of the role of Prospero, and I’ve dipped back into David Lindley’s book The Tempest in the Shakespeare at Stratford series, published in 2003, that covers the RSC’s productions of the play from 1945-2000. At the beginning of this period Prospero, the magician, was firmly in control, with Michael Redgrave in 1951 being the best example. In 1957 Peter Brook changed the way in which the role was played, with John Gielgud playing him. Gielgud dressed humbly, looked like a hermit, and most importantly, was angry. Lindley describes him as tormented and problematic, and the reviewer of the Times remarked: “We are almost invited to wonder if forgiveness will after all triumph over lower feelings. For through the performance the actor throws out a persistent suggestion that though Prospero intends of his own accord to surrender the omnipotence which he has only valued as the instrument of impersonal ends, he nevertheless has an inner battle of his own to fight”. 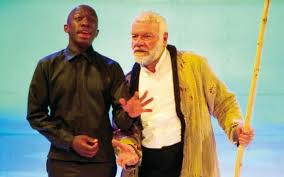 Anger and even vindictiveness came to be the norm for Prosperos in the 1970s and 1980s, so I remember Philip Voss’s performance at TOP and on tour in 2000-2001 coming as something of a relief. Voss played Prospero as a kindly figure and in spite of being modestly staged the production included a number of innovations such as projected images, a delightful masque, and gorgeous a cappella music composed by Orlando Gough. I still remember it being a magical production.

Gregory Doran describes the innovations of computer-generated effects as “storytelling for the 21st century, taking the audience’s imagination into new realms”. He may be right, but no amount of special effects are more important than the creative artists and performers who put them before us.