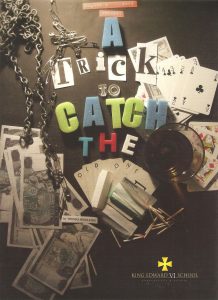 On Sunday 12 March 2017 I attended the last of four performances given by Edward’s Boys of Thomas Middleton’s city comedy A Trick to Catch the Old One. It was another triumph for this group, led by Perry Mills, consisting of boys attending King Edward VI School in Stratford-upon-Avon, almost certainly attended by Shakespeare himself. In his note, Perry explains “The work is demanding, requires discipline and is enormous fun. It also involves a great deal of sex and violence. Onstage. What more could a group of boys ask for?”

It’s an inspired idea: Edward’s Boys explore the repertoire of the boys’ companies of Shakespeare’s times, but do so in a way that makes sure we never forget we are in the twenty-first century. In some productions (though not this one), boys have come on wearing elements of school uniform, as if to remind us who they are. This time the first thing the audience saw as they took their seats was the drum kit, electric keyboard and guitars. And the coolest place to be all evening was in the 5-piece band, Teenage TricKES, in which the leads took it in turns to do the vocals.

The production found its style in the anti-establishment energy of punk, so much so that the programme includes a two-page article by Dr Jonathan Heron examining the beginnings and development of the movement, and how it relates to Middleton. He suggests Middleton’s writing “has all the danger of a Sex Pistols lyric”,  and is “fascinated by the psychological complexity of human desire and acts of atrocity, committed with punk-ish abandon”. 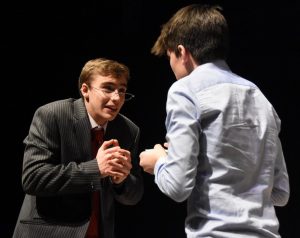 A scene from A Trick to Catch the Old One

The concept frees the production of any quaintness and allows us to concentrate on the extraordinary vitality of the play, the brilliant choreography, and the subtle detail of the performances. There’s no attempt to turn the boys into seventeenth century highly-trained members of early modern boys’ companies, or us into seventeenth-century audiences. Instead we see that, as today, most people are out for themselves. The plot turns on the protagonist who has lost all his own money and is denied his inheritance by a wealthy uncle. He comes up with the idea of trying to trick the old ones of the title by bringing to London a young prostitute (or courtesan) under the pretence that she is a wealthy widow. The vision of the old men behaving badly as they compete for her is enough to ensure we side with the young prodigal and the courtesan.

Watching the play now, the audience can’t help but ask why these particular plays were written to be performed by boys rather than adults. This play was written around 1605, when the boys companies, as Hamlet reminds us, were all the fashion, and Middleton wrote several comedies for them. In his book Shakespeare & Co. Stanley Wells comments “It is difficult for us to imagine the effect produced by these young actors when they were performing the highly sophisticated, often bawdy, plays written specifically for them”.  Laurie Maguire notes, too, “the boys – of all ages- are simultaneously innocent and knowing in performance”. 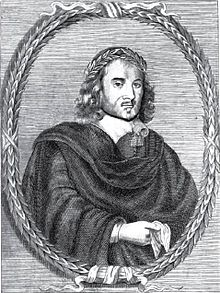 Shakespeare is thought to have seen Middleton’s talent and promoted it.  They collaborated on Timon of Athens, and we can see a direct parallel between the line of tradesmen demanding money from Witgood and Timon’s so-called friends who abandon him when he loses his money. A recent theory suggests that Middleton may have also collaborated on Shakespeare’s All’s Well That Ends Well. The themes of obsession with property, money and power, deception and disguise, corruption and family breakdown between the generations, so strong in these plays by Shakespeare  and particularly in King Lear, are also here in A Trick to Catch the Old One, albeit dealt with in a completely different way by Middleton.  It’s also thought that Middleton made additions to Macbeth and Measure for Measure, probably after Shakespeare had died when alterations were needed.

Unlike Shakespeare, Middleton did not tie himself to a theatrical company, and no collected edition of his works was issued around the time in which he lived. Many of his plays were published anonymously or with false attributions so arriving at an agreed body of work has been challenging, particularly given the realisation over the last few decades that collaboration was normal when writing for the high-pressure world of the theatre. In 2007 Oxford University Press published Thomas Middleton: The Collected Works.  There is more information at this website.

Audience reaction to Edward’s Boys remains outstanding, not least among the academic community who have commented that the productions are “joyful” and “inspired” as well as “outrageous”. Performances are now regularly given in Oxford and London as well as Stratford and nobody needs to miss them as each production is available on DVD through the website. Here’s to the next one!

This entry was posted in Legacy, Stratford-upon-Avon and tagged A Trick to Catch the Old One, Edwards' Boys, King Edward VI School, Perry Mills, Thomas Middleton. Bookmark the permalink.