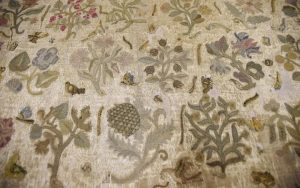 A couple of months ago a new discovery for those of us interested in early modern England was announced. One of Elizabeth 1’s dresses, or at least part of one, had been found in a small church in rural Herefordshire. This gorgeously-embroidered piece of material has become known as the Bacton altar cloth. Using gold and silver thread, indicating it belonged to royalty, it was many years since it had been used, but was kept in a case in the church until spotted. The story of the cloth is told by Joint Chief Curator for the Historic Royal Palaces Tracy Borman, in her new book The Private Lives of the Tudors. Tracy has said: ‘This is an incredible find – items of Tudor dress are exceptionally rare in any case, but to uncover one with such a close personal link to Queen Elizabeth I is almost unheard of. We’re thrilled to be working with St Faith’s Church to conserve this remarkable object, which will now be further examined by our conservation experts at Hampton Court Palace, where we hope to be able to conserve and display it in future.’ 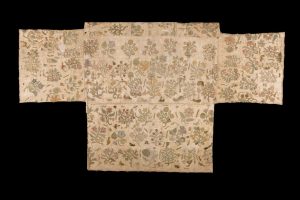 This article explains more about the process by which the dress was found and is being conserved.

Tracy is currently promoting her book with a series of talks, including one in Stratford-upon-Avon for the Literary Festival, on 29 April at 1.30pm. Details of her other talks are on her website.

A new online resource about Elizabeth 1 has been recently launched by The National Archives, also curated by Tracy Borman: “Including transcripts and commentary on a collection of original manuscripts, it explores her style of monarchy and considers whether she really was a ‘weak and feeble woman’.”  This fabulous resource is aimed at schools, but contains lots of great material and background about the Virgin Queen.

Queen Elizabeth, and her dresses, have also been highlighted in the past few years by the other Joint Chief Curator at Historic Royal Palaces, Lucy Worsley. Both curators are doing a fantastic job of promoting these collections that include 10,000 pieces of costume worn by kings, queens and their courtiers and known as the Royal Ceremonial Dress Collection. Lucy’s documentary Tales from the Royal Wardrobe was screened a few years ago now and unofficial copies come and go on YouTube, but a terrific clip of Lucy being dressed in a copy of one of Elizabeth 1’s outfits is available. 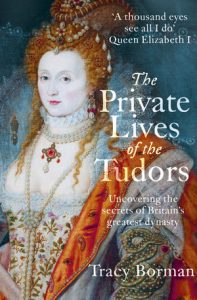 There has been some speculation that the Bacton cloth might be part of the dress worn by Queen Elizabeth in the Rainbow Portrait, as the gorgeous embroidered flowers are similar in style to those on the bodice she wears in the picture. However without any representation of the skirt, which is surely what the altar cloth must have been, this remains unproven.

Elizabeth was known to have many dresses, and it’s perhaps surprising that these highly-decorated and valuable items disappeared. This one is thought to have survived because it was given to one of Elizabeth’s ladies in waiting who was a parishioner at Bacton. The reported fate of some of her other clothes shows they were held in less respect. On 8 January 1604, only the year after Elizabeth had died, a masque was performed in the Great Hall of Hampton Court Palace. This was The Vision of the Twelve Goddesses, written by Samuel Daniel and one of the earliest Stuart Court masques. It was one of the first occasions when royalty and courtiers took part in entertainments instead of just watching them. The twelve Goddesses were represented by Queen Anne of Denmark, consort of James 1, and eleven of her ladies in waiting. The Queen took the part of Pallas Athena, and the ladies danced and paraded to the Temple of Peace while others sang.

The sumptuous costumes were ransacked from the wardrobe of Queen Elizabeth, containing 500 dresses, many of which had been worn only once. They included a sky-coloured mantle embroidered with gold and peacock feathers, and a mantle embroidered with silver half moons. The real expense came, however, with the jewels worn by the ladies. It was said that the value of the Queen’s gems came to £100,000. For obvious reasons, Royal masques continued to be enormously popular, but their extravagance was one of the factors that went on to make the Stuart kings unpopular. Clothes have probably never been just about fashion, and whereas Queen Elizabeth had used costume to demonstrate her power and that of her country, the new dynasty used these same items to entertain themselves and their friends.