Shakespeare and the destructiveness of fire

Shakespeare uses fire as a metaphor for the energy of life as well as the destructiveness of death. He writes of the fires of purgatory, of the warming fire on the hearth and of the fires lit to tell of victory in war. In his everyday life Shakespeare experienced fire’s dreadful, swift violence in both Stratford and London and fire has continued to be part of the Shakespeare story. 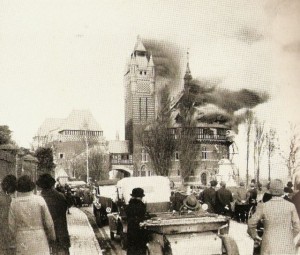 The theatre burning, showing the wind blowing away from the Library wing on the left

6th March is the anniversary of the most famous of Stratford-upon-Avon’s many fires. A few people are still alive who remember how in 1926 the Shakespeare Memorial Theatre caught fire and, within a few hours, was reduced to a charred and smouldering ruin. The cause of the fire has never been established, but the theatre was being made ready for the Shakespeare Festival to begin a few weeks later. It might have been a dropped cigarette, or perhaps an electrical fault. It was a common occurrence: in the nineteenth century the average life of a theatre was only 20 years, because of the regularity with which they burned down.

Stratford saw many fires during Shakespeare’s lifetime, the worst taking place in 1594, 1595 and 1614. The first two of these have already been extensively written-about, but in his new essay in Warwickshire History* Dr Robert Bearman closely examines the evidence for the 1614 fire, estimated at first to have caused £8000 of losses with fifty-four houses and many barns and outbuildings destroyed. It happened on Saturday 9 July, and devastated areas near to Shakespeare’s house New Place. A diagram shows that the worst-affected areas were the lower end of Chapel Lane (below the garden of New Place), and Sheep Street.

With several hot dry summers leading to fires in a number of other towns, Stratford’s Corporation had recently discussed the town’s fire precautions, finding them inadequate. Orders in 1612 had suggested that members of the Corporation should provide leather buckets “to cary water in for the better defence and preservacion of the houses & buildings…against casualtie of fyer”, but most had failed to do so. It’s hard now to believe that even if all forty-two buckets had been provided they could have made much difference to a fire fanned by strong winds. 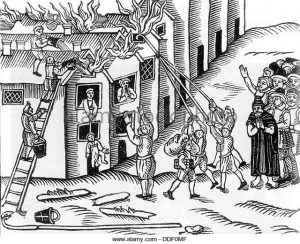 The essay  explains how the destruction of fires was dealt with in the days before insurance. As in other towns, the Stratford Corporation authorised several people to go around the country gathering donations. Although it was in everybody’s interest to contribute (it could be your town next), the system was inefficient and open to corruption. Bob’s research shows that the collection was poorly organised, bringing in only a fraction of the money needed. The largest local contributions were given by people in Bridge Street, a commercial street in the town unaffected by the fire, but collectors went as far as Kent. As there is no mention of Shakespeare I assume there’s no way of knowing if he contributed to help his neighbours.

A report noted that fires “had their beginnings in poore Tenements and Cottages which were Thatched with Strawe, of which sort very many have byn lately erected”. The solution was to replace the thatch with tile or slate, but the poor could not afford to do so making the anti-thatching policy impossible to enforce. The fire impacted severely on the prosperity of those affected, delaying the rebuilding by five years or even longer. The whole essay offers a fascinating glimpse of a rarely-seen aspect of life in Jacobean England.

It’s thought that by 1614 Shakespeare had retired to Stratford permanently, so he may well have watched the buildings near his own house going up in flames. This must have brought back dreadful memories: less than a year before, on 29 June 1613, the Globe Theatre in London had burned down during an early performance of his play Henry VIII. As a spectacular part of the action, cannon were set off to welcome the arrival of the King, and as a result burning material landed on the thatched roof, setting it alight. Sir Henry Wotton told how the audience were so engrossed in the play it took some time for them to notice. The fire “kindled inwardly, and ran round like a train, consuming within less than an hour the whole house to the very grounds”. By a miracle, nobody was hurt. Shakespeare must surely have been there: both a shareholder and the joint author of the play, he would have wanted to observe how the play was received by the audience and to assess the performances of the actors. The fact that the Globe was rebuilt within a year, with a fire-resistant tile roof this time, shows what a thriving and profitable business the theatre was. Around this time Shakespeare retired to Stratford, presumably looking for a quieter life. Instead he experienced the anxiety of another major fire approaching his own doorstep.

*With thanks to Dr Robert Bearman who has generously allowed me to quote from his essay Stratford-upon-Avon’s Fire of 1614, published in the Winter 2016/7 edition of Warwickshire History.