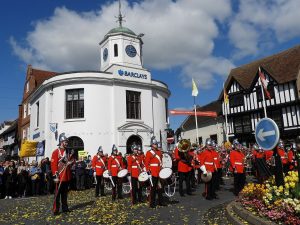 The band at the head of Bridge Street

In 2017 I am more aware than ever how lucky I am to live in Stratford-upon-Avon, able to take a full part in the whole weekend of the Birthday Celebrations, not just the day itself. So many events take place it isn’t possible to follow more than a few as many organisations run their own jollifications. We were particularly busy because we have also been promoting the Story of the Shakespeare Club of Stratford-upon-Avon, the organisation which originated the regular celebrations for Shakespeare’s Birthday almost 200 years ago.

I like to help out at the Celebrations by being a volunteer marshall, a role that mostly consists of guiding people to the places where they are supposed to be, and making sure they pull their flags at the right moment. Because of this and the Shakespeare Club’s historic role in the town I was invited to a reception at the Town Hall on Friday evening hosted by the Town Council. This included entertainment from a Rock Choir, the introduction of a new William Shakespeare, a gentleman by the name of Paul Workman, who appeared in the procession for the first time on Saturday, a birthday cake and confetti along with gracious speeches from our Mayor Juliet Short. 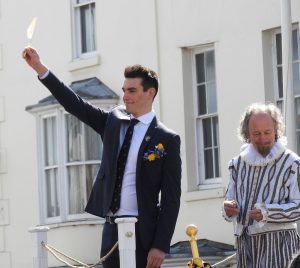 The quill is held high by the Head Boy of KES, with William Shakespeare standing by

On the day itself we helped get the parade into order in the beautiful gardens of New Place before setting off for Bridge Street where the Head Boy of KES was presented with a quill by William Shakespeare, flags of the nations and cultural organisations were flown, bands played and the national anthem was sung. The parade, led by the pupils of Shakespeare’s school,  then set off for Holy Trinity Church where Shakespeare is buried, for the handing over of floral tributes. The Shakespeare Club was allocated space in Bridge Street and members marched under their brand new banner, all in glorious sunshine.

After the parade, many different events take place and this year we opted to take part in the traditional grand luncheon, for the first time held in the Crowne Plaza Hotel. The hotel stands on the bank of the river and guests were able arrive at the luncheon by boat. The 500 diners drank a number of toasts including “The Immortal Memory of William Shakespeare” which dates back to the very first celebrations, and the award of the Pragnell Award for outstanding achievement, this year won by Sir Antony Sher. 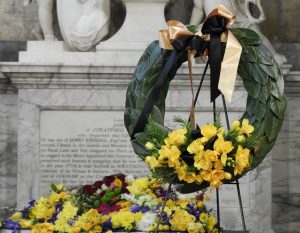 The celebrations do not end on the Saturday, as the Shakespeare service at Holy Trinity Church is always held on Sunday morning. Another colourful, if relatively short, parade, is led by one of the bands on duty on the Saturday. I watched the parade, and later on visited the Church to enjoy the sight and scent of the flowers left on Saturday. I spotted the Shakespeare Club’s laurel wreath on a special stand across the chancel from Shakespeare’s monument.

If you want to think about visiting for the weekend next year you can already save the date, with the big parade taking place on Saturday 21st April 2018. The website Shakespeare’s Celebrations will in due course reveal what is being planned: all we know so far is that it’s going to be very different, with much more participation from local groups and a real carnival atmosphere. Perhaps you might even like to take part, or to help.

The following photographs were all taken by myself or my husband Richard Morris over the course of the weekend. I hope they convey something of the festive atmosphere and perhaps encourage you to join Stratford-upon-Avon’s unique celebrations next year. 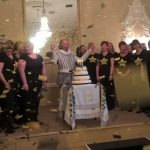 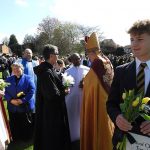 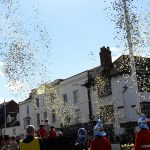 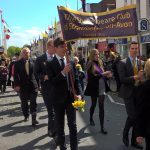 The Shakespeare Club banner leads members in the parade 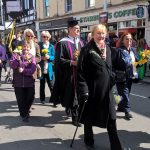 Members of the committee and the club in the parade 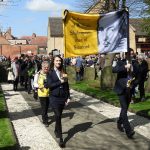 The head of the parade reaches Holy Trinity Church 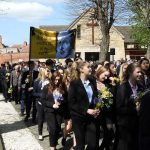 Pupils from Shakespeare’s School in the parade 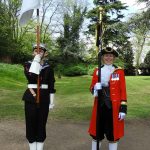 Stratford-upon-Avon’s new Beadle in her regalia, accompanied by a Sea Scout 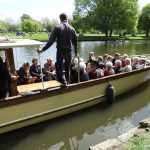 One of the boats taking diners to the luncheon 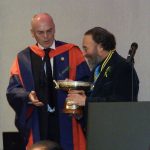 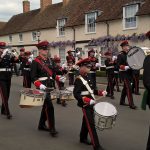 The band leads the procession to the Shakespeare Service, 23 April 2017 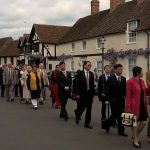