A summer of great events for those interested in Shakespeare and his theatrical background is just getting under way. From 12-30 June 2017 the fifth play-reading marathon will be held at the Shakespeare Institute in Stratford-upon-Avon. Up to now, these have focused on the development of a single creative writer. Subjects have been John Fletcher, Thomas Heywood, Philip Shirley and Thomas Dekker. As in previous years students, staff, alumni, and friends of the Shakespeare Institute will take part in unrehearsed, round-the-table readings organised by Dr Martin Wiggins.

Quoting from the Institute’s website, “this year we have decided to concentrate on all of the extant plays of a particularly fruitful and important period of the emerging English theatre. Not only do these works give an invaluable insight into the theatrical world in which the young William Shakespeare began his career as actor and writer, but they also reflect a significant moment of cultural change and creativity in which the theatre became a powerful and frequently controversial form of public art.” The period covered is 1581-1591, the eleven years immediately before Shakespeare became a fully-fledged playwright for the public theatres. Many of them are plays that Shakespeare must have seen himself, and must have inspired his own work. Only forty-one plays have survived from this period, and every one is being read, in chronological order. 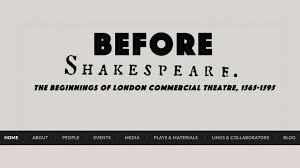 This year’s marathon is being run in association with the Before Shakespeare project that is currently exploring the early plays and playhouses of the Elizabethan era, run by Andy Kesson.

Later this summer Before Shakespeare is running a conference at the University of Roehampton, London, from 24-27 August. It will cover a wide range of subjects including the playhouses themselves, writers, the plays that were performed, stagecraft and theatrical companies. The full schedule and details about how to apply are available here.

Also related to Before Shakespeare is a series of readings at the Sam Wanamaker Playhouse, Shakespeare’s Globe, including Fedele and Fortunio by Anthony Munday on 18 June, the anonymous play Mucedorus on 16 July and, timed to coincide with the conference, John Lyly’s Sappho and Phao on 27 August.

A Read not Dead reading at the Sam Wanamaker Playhouse

Another event that readers of this blog might be interested in will be taking place at the Shakespeare Institute on the afternoon of Thursday 6 July: the first performance since the seventeenth century of a recently discovered play The Dutch Lady. It’s a Restoration comedy that will be introduced by the discoverer of the play, Joe Stevenson, and followed by a panel discussion with scholars of the drama of the period. More information is available here.

Here is the full timetable for the marathon:

All readings take place in the Reading Room; live-tweeting will be displayed on screen.  The readings will be recorded for archival purposes.

7.00: Anthony Munday, Fedele and Fortunio, and George Peele, The Arraignment of Paris

2.30: John Lyly, Galatea, and The Famous Victories of Henry V

2.30: The Wars of Cyrus, King of Persia, and John Lyly, The Woman in the Moon

10.30: Robert Wilson, The Three Lords and Three Ladies of London

2.30: George Peele (?), The Troublesome Reign of John, King of England

10.30: Christopher Marlowe, The Jew of Malta

2.30: Robert Greene and Thomas Lodge, A Looking-Glass for London and England

2.30: King Lear and his Three Daughters

10.30: Jack Straw, and Anthony Munday, John a Kent and John a Cumber

2.30: William Shakespeare, The First Part of the Contention between York and Lancaster