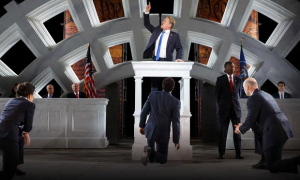 A scene from the New York production of Julius Caesar

Shakespeare’s fascination with politics can be seen in many of his plays, not only those directly based on British history. The Roman plays too examine the workings of power, looking at how countries have been governed and how those who do the governing take control. The late plays are often called romances, but question authority and how it is wielded: in Pericles Marina, a victim herself, demands of the ruler of the city how he can tolerate and even participate in corruption by visiting a brothel.

Do you know this house to be a place of such resort,
And will come into ‘t? I hear say you are of honourable parts,
And are the governor of this place.

If Shakespeare was alive today he would certainly be watching the worldwide political scene with interest. As long ago as January the Times Literary Supplement was publishing articles relating the then-new President to characters and episodes in Shakespeare’s plays.

Shakespeare would probably have made the most of the 140-character limitation, and would be writing beautifully-crafted tweets. President Trump’s tweets are more spur of the moment, and many subsequently are repeated in other media as well as on Twitter. One now-famous tweet featured the word “covfefe”. President Trump may have been half asleep while writing this one, and lots of people have had fun with it including writing humorous definitions of the new word. Pretty quickly somebody came up with another tweet suggesting this was actually a word used by Shakespeare. It would have been lovely if this had been true, but a bit of digging around shows it to be, inevitably, fake news.

The first clue was that the word was said to be in the First Quarto of Hamlet, published in 1603 and known as the “Bad” Quarto, “bad” being a word often used by the President. Rather than being buried in an obscure corner, the word appeared in the most famous speech in the play “To be or not to be”, one of the most corrupt sections of the text. Just to make it more convincing the tweet included a photograph showing the word in the quarto, a terrific bit of photoshopping. I had a look at online facsimiles of the Quarto and found that the word which had been replaced by “covfefe” was, appropriately, “vanity”. I take my hat off to the imaginative individuals who created this bit of clever light relief at a time when we’re much in need of it.

The President Trump/Shakespeare issue that has really hit the headlines, though, is the news that a production of Julius Caesar, staged in Central Park, New York, has created outrage. The actor playing Caesar has blond hair and dresses very much like the current President. There have been protests at performances, and it is reported that after Donald Trump’s son questioned it, two major funders, Delta Airlines and Bank of America, have pulled their funding of the theatre.

Stephen Greenblatt wrote an article on the subject, including the story about Queen Elizabeth’s own objections to a royal deposition, for the Washington Post.The Trump family shouldn’t fight Shakespeare

And this article in the Guardian documents the whole story.

Rather alarmingly, the Boston Globe has noted that theatres with Shakespeare in their names are now being targeted.

The theatre has of course defended itself, and the play: “Our production of Julius Caesar in no way advocates violence towards anyone. Shakespeare’s play, and our production, make the opposite point: those who attempt to defend democracy by undemocratic means pay a terrible price and destroy the very thing they are fighting to save.”

Trump is not the first President or leading politician to be represented in this way, and he certainly won’t be the last. The extreme reaction to the impersonation, though, indicates the sensitivity of the current administration. In a recent tweet, Greg Jenner wrote “remarkable that a play written 400 years ago, about a man murdered 2000 years ago, is the focus of political debate in 2017 #JuliusCaesar”. Shakespeare himself knew how powerful the bloody murder of the ruler would be, with Cassius stepping out of the moment to consider its historical significance.

How many ages hence
Shall this our lofty scene be acted over
In states unborn and accents yet unknown!