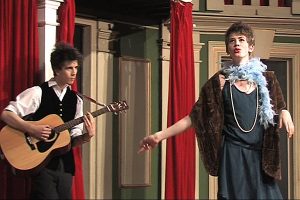 A scene from Edward’s Boys production of The Dutch Courtesan

I’ve written lots of posts mentioning Edward’s Boys, the brilliant troupe of boys from King Edward VI School in Stratford-upon-Avon who, under the leadership of Deputy Head Perry Mills perform plays that come mostly from the repertoire of the Boys Companies of Shakespeare’s own time.

Over the past couple of decades interest has grown in the wider field of early modern plays and theatrical practice, not just as they might reflect on Shakespeare’s plays. The current project Before Shakespeare is one, but there are others and Edward’s Boys are finding themselves much in demand right through the summer when it might be thought they would all be enjoying a few weeks off.

Towards the end of July they are involved in The Marston Project, on 22nd July 2017 performing selected scenes from the plays of John Marston at the Sam Wanamaker Playhouse at Shakespeare’s Globe in London. This is part of a series of events to mark the ongoing publication of The Complete Works of John Marston. When published, this will be the first complete critical edition of the work of this neglected playwright whose output included comedies, satire and tragedies. It’s a major project involving a team of fifteen scholars led by Martin Butler of the University of Leeds and Matthew Steggle of Sheffield Hallam University.  The performance by the boys is intended to provide clues for the scholars relating to how Marston’s work is received by an audience.

Later in the summer Edward’s boys continue to be in demand, with a workshop on 25 August as part of the Before Shakespeare conference at Roehampton University, London. This is open only to conference delegates. 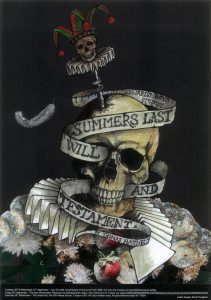 But Edward’s Boys major event this summer is to be a production of Thomas Nashe’s play Summer’s Last Will and Testament, dating back to 1592 when Shakespeare’s career as a writer was just beginning. The performances on 26 and 27 September will take place at the school in Stratford, followed by one performance on 29 September in the Sam Wanamaker Playhouse, Shakespeare’s Globe and the final one by invitation only in the Great Hall, The Old Palace School, Croydon.

This production is linked to another major scholarly editing work in progress, The Thomas Nashe Project, in which Oxford University Press will be publishing all of Nashe’ known writings and some that are dubious. As well as the new edition, there are to be a number of additional events of which this is one, and the project will also be making multi-media resources about Nashe available on its website.

Nashe is one of the most interesting of Elizabethan writers. He is thought to have collaborated with Shakespeare on some of his earlier plays. He was a brilliant man, a graduate of Cambridge University, but never found a literary form in which he could develop his skills, and died in 1601 aged only 34 . He’s now best known as a satirist and commentator, his pamphlet Christ’s Tears over Jerusalem an indictment of Elizabethan society. Summer’s Last Will and Testament, his only surviving play, is thought to have received its first performance in early October 1592.  It was performed in the Great Hall of the residence of Archbishop Whitgift, Croydon Palace, which explains the venue for the final performance in September.  The play was written and performed during one of the worst periods of plague in London, and Croydon was well away from the pestilence in the City. Playhouses in London were closed to avoid spreading illness even further, the Queen and many other people who were able to having temporarily left the city. The play has an elegiac quality suited to the sombre mood of the time. “Weepe heavens, mourn earth, here Summer ends”.  The lovely if mournful song from the play, “Adieu, farewell earth’s bliss” is well known:

Beauty is but a flower,
Which wrinkles will devour.
Brightness falls from the air;
Queens have died young and fair;
Dust hath closed Helen’s eye:
I am sick, I must die.

Here’s to a busy and hopefully fulfilling summer for Edward’s Boys!