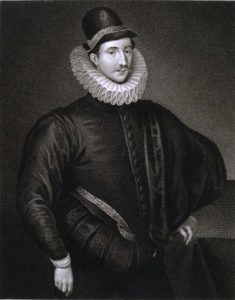 On 30 September 1628, Fulke Greville died, just days before his 74th birthday. He had lived a remarkable life, that ended dramatically after being stabbed by a servant who supposedly felt cheated after being left out of his master’s will.

It was an ignominious end for a man who had been a major political figure, serving under three monarchs, Queen Elizabeth, King James 1 and King Charles 1. As well as working in government he wrote poems and plays, sometimes sponsored poets and scholars, and knew the great writers of the day. His experience of life at court, and of life in Europe, gave him an extraordinary perspective.

Greville was ten years older than Shakespeare, and it’s hard to imagine that the two of them never met, either in London or back in Warwickshire. Greville came from a prominent Warwickshire gentry family, having distant connections with the Talbots and Dudleys, and through them with the famous Sidney family. He and Philip Sidney were classmates at Shrewsbury School and Sidney became a major influence on Fulke Greville and his literary work.

Sidney was recognised from his earliest days as a brilliant young man who has been described as “the model of perfect courtesy”, and a real Renaissance man. He was well-educated and read widely on many subjects including poetry, horsemanship and government. Best known now for his poetry, he longed to serve his country in the battlefield, and it was in battle in the Netherlands against the Spanish that he received the wound that killed him in October 1586. He was deeply mourned, not least by Fulke Greville who seems never to have got over his death. Indeed Greville’s most remembered achievement now is his Life of Sir Philip Sidney that he wrote many years later in 1610-1612.

There was though much more to Fulke Greville. He found and cultivated powerful friends.  Sidney’s father obtained for him a source of income in the Council of the Welsh Marches and other influential men Sir Francis Walsingham and Robert Dudley, Earl of Leicester, helped him to a seat in Parliament in 1581. He was subsequently elected to five consecutive parliaments for Warwickshire. He longed for the excitement of foreign adventures in battle but his talent for administration ensured he was kept in government in England. Queen Elizabeth showed him favour and he also gained from the accession of James 1. He acquired Warwick Castle in 1604 from the Crown and set about turning it from a defensive castle into a comfortable country house. In 1610 he was appointed as the borough’s recorder and his achievements were recognised in 1621 when he was raised to the peerage. 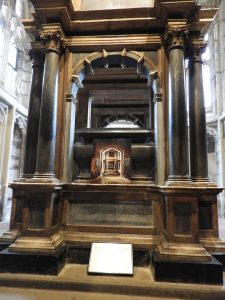 His closeness to Warwick is shown by the fact that although he died in London his body was brought back to the town to be buried in the Collegiate Church of St Mary. His massive tomb now takes up most of the Church’s Chapter House. Its magnificence indicates that he was not short of money, or of self-importance, and it bears the epitaph he had written for himself:  “Folk Grevill Servant to Queene Elizabeth Counsellor to King James Friend to Sir Philip Sidney. Trophaeum Peccati.”

Greville is also one of the most unlikely candidates for the authorship of Shakespeare’s plays. Not only did he have an extremely full life, two plays that he had written, Mustapha and Alaham, still exist. Currently a new critical edition of his plays is being worked on by Dr Sarah Knight of the University of Leicester, to be published by Oxford University Press. As the two plays exist in a number of manuscript and print versions the job of editing them is complex. However both plays are tragedies, have been described as “moralistic and philosophically challenging”, and Greville specified that they were to be read in private not performed in public. They are a far cry from Shakespeare’s popular dramas.

He also wrote sonnets, most on very serious subjects. Here is one, on a theme that also obsessed Shakespeare, Time, that also uses the imagery of the natural world:

The Nurse-Life wheat within his green husk growing
Flatters our hopes and tickles our desire;
Nature’s true riches in sweet beauties shewing,
Which set all hearts with labour’s love on fire.
No less fair is the wheat when golden ear
Shews until hope the joys of near enjoying:
Fair and sweet is the bud; more sweet and fair
The rose, which proves that Time is not destroying.
Caelica, your youth, the morning of delight,
Enamel’d o’er with beauties white and red,
All sense and thoughts did to belief invite,
That love and glory there are brought to bed;
And your ripe years, Love, now they grow no higher,
Turn all the spirits of man into desire.