Posted on September 1, 2017 by Sylvia Morris 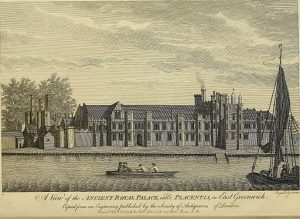 Greenwich Palace in the Tudor period

There is something special about the place where important events took place, no matter how long ago. Even where there are no remaining signs on the ground people still visit: perhaps the draw is that these sites make us use our imaginations so strongly.

It’s always surprising to find bits of the London that Shakespeare knew beneath the city streets and buildings. A couple of weeks ago it was announced that remains of Greenwich Palace had been found.

Greenwich, on the banks of the Thames several miles downstream from London, has been a place of significance for many centuries. The Tudor palace was where Henry VIII was born in 1491, where he married Catherine of Aragon, where their daughters Mary and Elizabeth were born to his first two wives. Later Henry married his fourth wife, Anne of Cleves there. When she became Queen, Elizabeth 1 continued to use Greenwich as well as other royal palaces, and it has a particular significance for Shakespeare. Over the Christmas period in 1594 the newly-formed Lord Chamberlain’s Men played twice at court in Greenwich. The accounts list William Kempe, Richard Burbage and William Shakespeare as payees. It’s the earliest document that links Shakespeare to a theatrical company, showing that he was one of its leaders, and tells us that the company was important enough to perform before the monarch. It must have been an extraordinary experience for them all. 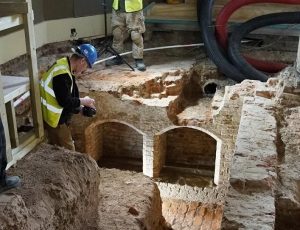 The remains of the Tudor palace at Greenwich

Sadly the excavation can not bring us any nearer to those actual events, and the remains are relatively humble, finding “two rooms of the Tudor palace, including a floor featuring lead-glazed tiles. Being set back from the river, these are likely to be from the service range, possibly where the kitchens, bakehouse, brewhouse and laundry were. One of the rooms was clearly subterranean and contains a series of unusual niches, which archaeologists believe may be ‘bee boles’ for the keeping of skeps (hive baskets) during the winter months when the bee colonies are hibernating.” The palace known to Henry VIII and Elizabeth was demolished and the magnificent buildings that are now the Old Royal Naval College, designed by Christopher Wren, were erected on the same site. The current finds were made during the restoration of this building’s magnificent Painted Hall which is to be fully opened complete with a new visitors centre.  In 2006 an earlier excavation uncovered remains of the chapel build by Henry VII where those two marriages of Henry VIII took place.

Among the descriptions of the palace I was intrigued to find another link to Shakespeare. The original palace that was replaced by Henry VII was built by Humphrey, Duke of Gloucester in 1443. This is Shakespeare’s “Good Duke Humphrey”, they youngest brother of Henry V. He appears rather briefly in Shakespeare’s play of the same name, but after Henry’s death Humphrey became a major political figure, appointed regent to the young Henry VI. As Lord Protector, the most powerful man in the kingdom, he built his palace in Greenwich. In Henry VI parts 1 and 2 he constantly battles against the other English nobles, making enemies who eventually get him arrested for high treason, and is brutally murdered. Writing Humphrey’s lament, and the King’s later speech, Shakespeare uses some of those long extended metaphors that relate to his own rural upbringing:
Ah! thus King Henry throws away his crutch
Before his legs be firm to bear his body.
Thus is the shepherd beaten from thy side,
And wolves are gnarling who shall gnaw thee first.

And Henry speaks out in his defence, but too late.

Ah, uncle Humphrey! in thy face I see
The map of honour, truth and loyalty:
And yet, good Humphrey, is the hour to come
That e’er I proved thee false or fear’d thy faith.
What louring star now envies thy estate,
That these great lords and Margaret our queen
Do seek subversion of thy harmless life?

Thou never didst them wrong, nor no man wrong;
And as the butcher takes away the calf
And binds the wretch, and beats it when it strays,
Bearing it to the bloody slaughter-house,
Even so remorseless have they borne him hence;
And as the dam runs lowing up and down,
Looking the way her harmless young one went,
And can do nought but wail her darling’s loss,
Even so myself bewails good Gloucester’s case
With sad unhelpful tears, and with dimm’d eyes
Look after him and cannot do him good,
So mighty are his vowed enemies.
His fortunes I will weep; and, ‘twixt each groan
Say ‘Who’s a traitor? Gloucester he is none.’

“Good Duke Humphrey” is one of the most sympathetic of Shakespeare’s nobles and even though nothing of his palace has been found it’s to be hoped that in the new visitors centre that the story of Duke Humphrey and his palace will be told.