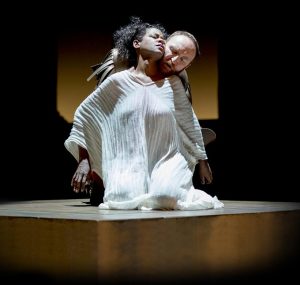 I recently attended a performance of Antony and Cleopatra at the RSC. Watching Josette Simon playing the Queen of Egypt, I couldn’t help thinking of others I’ve seen in the part, and wondering why it’s such a difficult one. Surely it ought to be as important for female actors as Hamlet is for men, but this isn’t the case.

Perhaps one reason is that Hamlet is described in only the most sketchy way in the play by Ophelia and Horatio. The field is clear for Hamlet to be what the actor wants to be within the confines of the text. Cleopatra, by contrast, has a lot to live up to: not just that most famous of speeches, the description of her by Enobarbus, but the Romans, the tittle-tattle of Egyptians, and of Antony’s friends. She’s a gipsy, a strumpet, a glorious piece of work, a woman of infinite variety.

I’ve recently been enjoying reading Stanley Wells’ book Great Shakespeare Actors, which examines the careers of 39 of them. The author acknowledges the impossibility of his task by dedicating the book “To all the great Shakespeare actors not included in this book”. Only ten are women, and Cleopatra is listed as one of their principal Shakespeare roles for just four: Edith Evans, Peggy Ashcroft, Judi Dench and Janet Suzman. About three quarters of the men excelled as Hamlet.

One of the problems is the play itself: quite soon after it was written there was obvious unease about it. Dryden’s All for Love reworked Shakespeare’s play extensively. It was first staged in 1678, by which time women were on the stage, and remained the only version of the play to be staged until David Garrick restored Shakespeare’s play in 1759. Even David Garrick failed to make the play a success though, and in the first half of the nineteenth century the great actor-managers JP Kemble and Macready, put the play on likewise with little success. Isabella Glyn, acting with Samuel Phelps in 1849 was the most successful Cleopatra to date. Glyn was formidable rather than alluring, but she was followed by several Cleopatras who were known for their beauty including Lillie Langtry and Constance Collier, both making the most of the fashion for Egyptian artefacts. 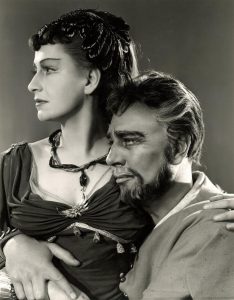 The twentieth century saw far more successful Cleopatras, Vivien Leigh acting with her husband Laurence Olivier in 1951, followed quickly by Peggy Ashcroft in Stratford in 1953. Ashcroft was not a conventional beauty, though this did not stop her being attractive and compelling, using her intelligence to bind her Antony, Michael Redgrave. Although Edith Evans was indisputably a great actress in many of her roles, Cleopatra, performed in 1925-6 and again in 1946, was not one of her best. J C Trewin described her as “matchless in the early wheedlings, rages, languishing”, but “not a Cleopatra for fire and air”.

Modern Cleopatras still have to contend with the image of Elizabeth Taylor in the 1960s blockbuster Cleopatra. She didn’t play Shakespeare’s Cleopatra, who would probably have been a greater challenge, In 1972, coinciding with the British Museum’s great Tutankhamen exhibition, Janet Suzman and Richard Johnson played the couple in a gorgeous production, again in Stratford. Most of the greatest female actors played the role towards the end of the 1900s: Vanessa Redgrave, Glenda Jackson, Judi Dench and Helen Mirren, Jane Lapotaire for the BBC TV Shakespeare, and at the Globe, Mark Rylance took the part on in 1999 giving a fascinating insight into how the part might have been played and received in the first productions. 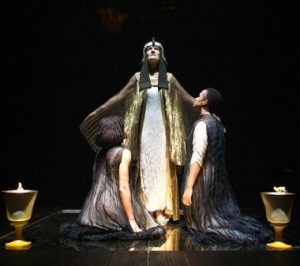 A Cleopatra who made sense of all the conflicts of the part, and one of the most successful I’ve seen, was Harriet Walter who with Patrick Stewart performed in Gregory Doran’s production in Stratford in 2006.  Walter described how she approached the part: “She’s an extraordinarily intelligent, intense woman, a complex character who uses her sexuality as a political weapon. I decided I was going to play Cleopatra as someone with a brain. She’s kept Egypt, this tiny country, in a balance of power with the almighty Roman empire, and she’s done it through force of personality.”

There’s an interview with Doran here in which he talks interestingly about the play, how both Antony and Cleopatra are “playing” themselves, and about how both are on public display all the time, and everybody talks about both of them. In the first scene, Antony is aware of their fame:
When such a mutual pair,
And such a twain can do’t, in which I bind,
On pain of punishment, the world to weet
We stand up peerless.

The parallel with modern celebrities is clear: how can two such famous public personalities have a proper relationship with each other? The RSC’s current production of Antony and Cleopatra has now closed in Stratford but will be at the Barbican in London from 30 November 2017 to 20 January 2018. An interview with Josette Simon on playing the role is here.