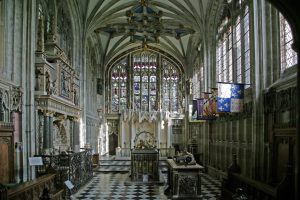 I recently went on a tour of one of Warwick’s most ancient buildings, the Collegiate Church of St Mary. As we were taken round, our guide pointed out memorials that made me wonder about the impact this town and its buildings must have made on the young William Shakespeare. For centuries St Mary’s Church has been the most important of Warwick’s churches because of its connection with the Castle. Ordinary people might not have been inside the castle, but visitors to the town, including Shakespeare and his family, would have been to the church to “view the manners of the town,/ Peruse the traders, gaze upon the buildings”, just like Antipholus of Ephesus in The Comedy of Errors on his arrival in Syracuse. At the church they would have seen memorials to the famous occupants of the Castle.  Their names, and their stories, find their way into Shakespeare’s history plays. 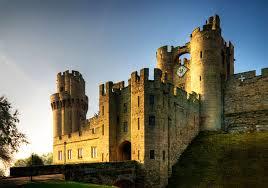 As county town, Warwick has always been the place from which the whole area was administered. Stratford, a few miles downstream, may have been a busy market town, its river and bridge making it important for communications, but it had little political significance. Magnificent Warwick Castle dominates the town from its situation overlooking the River Avon. It’s described as England’s greatest remaining medieval castle and has been owned and visited by many of the most powerful people in the country.

There has been some kind of castle on the spot for well over 1000 years, but it was in the thirteenth century that the castle became nationally significant. In 1268 the De Beauchamps became Earls of Warwick and in the mid 1300s Thomas Beauchamp became Earl during the reign of Edward III. Although Shakespeare did not write about this period of English history itself, the story of Edward III and the disastrous complications relating to the inheritance of the crown following the death of his eldest son forms the backdrop to all of Shakespeare’s history plays from Richard II to Richard III.

This Thomas Beauchamp was one of the original Knights of the Garter who fought alongside Edward III’s son the Black Prince at Crecy and Poitiers. He planned to replace the existing 12th-century church with something grander but died before this could be achieved. His son put the striking tomb of Thomas and his wife Katherine in the chancel of the church, right in front of the high altar. 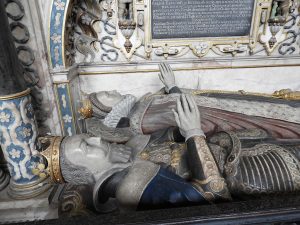 The tomb of Robert Dudley and his wife Lettice

A later Beauchamp, Richard, the 13th Earl of Warwick, served in France as Captain of Calais and supervised the trial of Joan of Arc, dramatized in Shakespeare’s play Henry VI part 1. The Earldom passed to the Neville family soon after and during the Wars of the Roses, Richard Neville, 16th Earl of Warwick, was one of the most powerful men in the country. A Yorkist, he helped Edward IV to the crown and was known as the Kingmaker. He’s a major figure in Shakespeare’s Henry VI plays, eventually crossing to the Lancastrian side and being defeated by King Edward, whose brother Richard III took ownership of Warwick Castle. Under the Tudors the Dudley family were created Earls of Warwick.

The real glory of St Mary’s Church is the Beauchamp chapel, built in 1442-62 to house the tomb of Richard, who died in 1439. It’s a masterpiece of the English Gothic style, said to be the finest chantry chapel in the country and certainly deserves more attention than it gets.  Also buried within the chapel are members of the Dudley family including Ambrose Dudley “The Good Earl”. It’s his younger brother Robert, though, who is for us the most famous person to be buried there. This Robert Dudley was Queen Elizabeth’s favourite. He, his third wife Lettice and his son are all buried in the chapel. 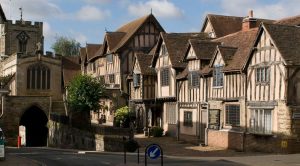 Robert Dudley is also connected with another of the most striking of Warwick’s historic buildings, the Lord Leycester Hospital. This group of timber-framed buildings date from the 14th century and until the reformation was home to Warwick’s medieval guilds. Dudley acquired the buildings in 1571 and repurposed them as a “Hospital” to which elderly and infirm soldiers and their wives could retire. Today it still houses ex-Servicemen and their partners. Parts of the building, including the Guildhall, Chapel and gardens are open to the public. On 3 November 2017 an event is being held at the Hospital that might be of interest to Shakespeareans. It’s a Banquet to celebrate the 400th anniversary of James 1’s visit to Warwick, and on 4 November there will be a daytime continuation of the celebrations. Tickets for the Banquet are already on sale. Music, merriment and a great feast are promised.